Affairs of the Gods: How Could These Victims Have Been So Clueless?

If you've been hanging around me or my blog(s) for any length of time, you probably know that the fiction writer in me favors the first approach -- and imagining these characters and trying to discover their motivations and understand the choices they might have made is where a lot of the fun of writing about them comes from. So with this question, it's only natural that I'd start with the more literal perspective. (It's more just more interesting guys!)

The Short Answer:
I suspect that they were less clueless and more just uninformed.

Here's the thing. Today, if some king's daughter were kidnapped by a really pretty bull, the whole world would know about it. Or at least the part of the world that pays attention to that kind of information, anyway. (She'd also be found and returned home, probably, rather than dumped in another country to marry into their royal bloodline, but I digress.) Back in Europa's time? It was probably more of a quiet, regional event. Why should she expect the bull of being a god in disguise, intent on stealing her away, if she'd never heard of Zeus pulling that kind of stunt?* Maybe, possibly, some kind of rumor of Zeus coming down as a shower of gold to... make sweet love? to Danae** might have been making the rounds somewhere in the Peloponnese, but it is REALLY unlikely the story would have made it as far as Phoenicia, where Europa was hanging out with her maiden friends, enjoying the attentions of a particularly tame bull.

Now maybe these two examples are cheating, because both of these women were earlier victims of Zeus' proclivities, but the fact remains that there are no guarantees that any one of the  importuned women who followed would have had extensive knowledge of the god's other exploits. There's a couple of exceptions of course. Alcmene, for example, was the granddaughter of Perseus, so the story of Great-Grandmother Danae could easily have been part of family lore before her run in with Zeus and the subsequent birth of Heracles. But since Zeus took the form of Alcmene's own husband, Amphitryon, there is really no possibly way that forewarning might have helped her avoid his attentions.

It's easy for us to see all these stories laid out neatly and chronologically, with repeated themes of Zeus putting one over on some poor beautiful girl, and wonder why these people couldn't figure it out. But the truth is, those stories weren't assembled into the written word at all until centuries after the fact. If you consider that the Trojan War was basically the end of the Age of Heroes, and all the philandering that entailed, then the majority of these events would have taken place during the Greek Bronze Age -- the Mycenaean and Minoan periods. At the end of which, civilization kind of collapsed and the Greeks not-so-promptly forgot how to write for several hundred years.

Oral history is a lot more limited, regionally, though Homer provides us with evidence that even oral stories could be spread -- if the bard thought the audience would be interested. But if he didn't?

Well. It sure makes me appreciate the bounty of the internet for self-education, that's for sure.


*Europa was mother to Minos, which means she was at least one, maybe two generations before Theseus and Heracles.

**Danae was the mother of Perseus, who was himself the very FIRST of the Greek Heroes. He did not actually ride Pegasus, and the Kraken is a sea monster out of Scandinavia. Just for the record.

Long before she ran away with Paris to Troy, Helen of Sparta was haunted by nightmares of a burning city under siege. These dreams foretold impending war—a war that only Helen has the power to avert. To do so, she must defy her family and betray her betrothed by fleeing the palace in the dead of night. In need of protection, she finds shelter and comfort in the arms of Theseus, son of Poseidon. With Theseus at her side, she believes she can escape her destiny. But at every turn, new dangers—violence, betrayal, extortion, threat of war—thwart Helen’s plans and bar her path. Still, she refuses to bend to the will of the gods.

A new take on an ancient myth, Helen of Sparta is the story of one woman determined to decide her own fate.

In January, I finally finished TAMER OF HORSES, a historical novel about Hippodamia's marriage to Pirithous, and the war with the Centaurs that followed. I started writing TAMER in 2012 -- prompted by an anthology call for ancient Greek themed romances. At the time I thought that turning a tragedy into a romance was just a question of picking the right end point in the story. There was no way I was going to turn the war with the centaurs into a happily ever after, if I included it in the novella. There was just too much death, too much destruction, and too much STORY to pack into anything with a 40,000 word limit.

So I wrote the romance novella and submitted it. Lucky for me (no, really!), I got the big R. Finally, I had the time and the words to turn that novella into a full length novel and cover the WHOLE story. And I am so stoked that I did. The more I wrote, the more I loved writing it. Hippodamia didn't have to be a typical Greek -- she'd been raised by Centaurs, after all. And with Pirithous came Theseus, and even better, his Amazon wife, Antiope. There is nothing not awesome about getting to write the four of these characters, particularly after I'd written HELEN OF SPARTA. I got to explore what Pirithous and Theseus were like in their glory days, and meet the women who had the strength not only to match them, but even to exceed them. Together, the daughter of the centaurs and the daughter of Ares make a very formidable team!

It was a stop and start struggle to figure out the path of the book and pull all the threads together. When I started during the summer of 2012, I never expected that it would be a two year journey. But I'm pretty proud of the nearly 110,000 words I ended up with! Hopefully my early readers will feel the same way, and after that... well, publishing is unpredictable at the best of times, but whether or not Hippodamia's story sells, I'll never regret having written it! 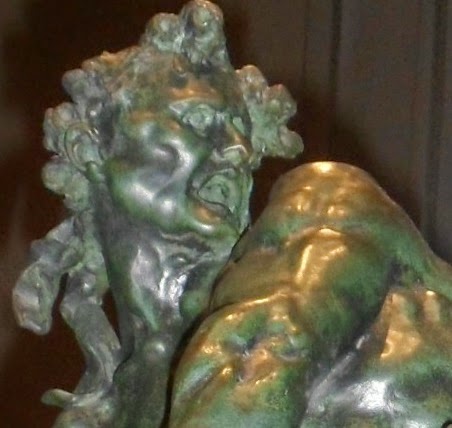 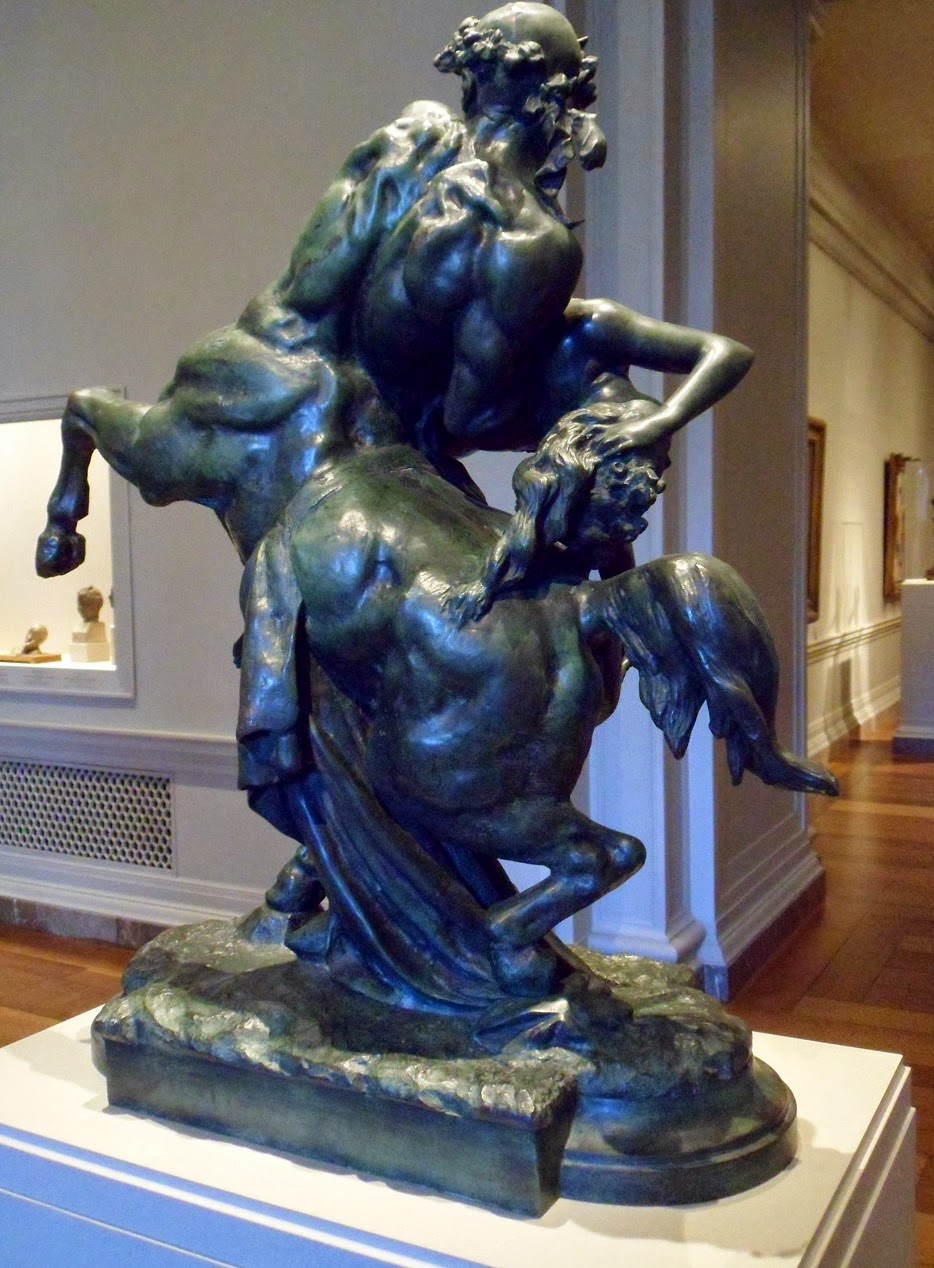 The Centauromachy and Art (I)

(crossposted)
The Centauromachy began, according to most accounts, with the wedding of Hippodamia to Pirithous. Because Hippodamia was kin to the Centaurs, they were invited to the wedding feast -- but apparently Pirithous was a little bit too generous with his wine, and the centaurs, unused to such strong drink, got drunk. And not giggles and daring fun, either. Angry and Lusty drunk. Wild and Violent drunk. So wild and so angry, in fact, that they thought it would be a good idea to make off with the bride herself, along with a fair number of other women, for the purposes of, well, violence and lust.

As you can imagine, Pirithous did not sit still for this, and with Theseus at his side, and the help of a number of other guests as well, they attacked and defeated the centaurs, rescuing the women, and driving the remaining horse-men from the city, and perhaps even the lands of the Lapiths entirely. Hippodamia escaped mostly unscathed, though I can't imagine she looked back on her wedding day fondly after that.

Which brings us to today's terrible photography -- because I happened across this bronze by accident (as usual) at the Wadsworth Atheneum. But the style was both fascinating and beautiful, and definitely inspired me when I started writing about Hippodamia and her marriage to Pirithous (even if this isn't a depiction of her abduction.)

There's a reason that mythology has been a subject of creative endeavors for so long. There's so much room in it for dynamic emotion and beauty. There are so many conflicts waiting to be brought to life and characters to explore. For instance -- how is Hippodamia, a woman, related to the centaurs (bred from mares) at all? And what relationship did the Centaurs feel they had to the Lapiths, if the centaurs came from Ixion's line, and Ixion maybe wasn't necessarily Pirithous' father? How did they all get along BEFORE the wine and the wedding came between them?

Half the fun, for me, is figuring out the story which leads to an answer.


Related: Where Centaurs Meet Pirithous, Character is Spawned
Pirithous, Son of Zeus, King of the Lapiths

photos taken by and copyright belonging to me!