I've written 3 second books in 3 different series now, and barring FATE FORGOTTEN*, they've all felt impossibly more difficult than the book that came before. First books build relationships, they weave together the tapestry of characters and create the threads of plot and conflict and challenge. First books, it seems for me, are more about character and relationships, rife with internal conflicts more than external -- Arianna and Bolthorn, Eve and Garrit/Eve and Thor/Eve and Adam, Helen and Theseus. For me, that's the easy part. The part I love most. I love bringing these characters together and watching them figure things out, building relationships and finding the support they need to conquer the troubles they're forced to face.

But second books are about the pressures of the outside world upon these characters after they've had their taste of happiness and found their strength. The tension and conflict is less present BETWEEN them, and more focused AGAINST them as a unit. There are still tender moments, still challenges that drive them apart, but the story ultimately isn't about their relationship with one another anymore. It's about how, with the support of one another, they will face the future, and all the challenges and conflict entailed. In second books, my characters aren't saving each other anymore -- they're saving the(ir) world.

For Bolthorn and Arianna, this means turning back. Returning to Gautar to face the growing threat they left behind, to save the friends and family who took grave risks for their sake, and protect both their peoples. For Helen, it means struggling, still, to face her fate without the hope of peace she had thought within her grasp. Bolthorn and Arianna, Theseus and Helen -- they have very different paths to walk, but the struggle of writing the book wasn't much different at all!

For me, writing the external conflict, the world-saving and the battle-scenes -- it's a frustrating challenge. And three books in, it hasn't gotten any easier.

*FATE FORGOTTEN builds a different relationship along side the external conflict, so it was less problematic for me to write. I also originally wrote FORGED BY FATE and FATE FORGOTTEN as one book, which was then belatedly broken into two parts, so it wasn't the same experience at all.

Email ThisBlogThis!Share to TwitterShare to FacebookShare to Pinterest
Labels: Blood of the Queen, Fate Forgotten, Forged by Fate, Helen, Helen of Sparta, Helen of Troy, Honor Among Orcs, writing

Remember when I said I was hoping I'd have some news for you when I got back? Well, we're in luck! The stars have aligned and I have lots to share! 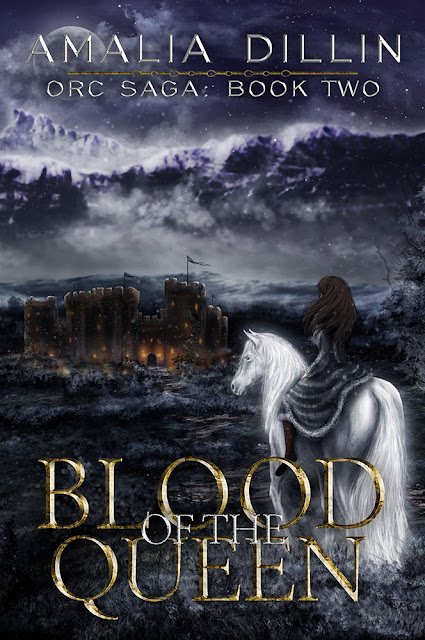 BLOOD OF THE QUEEN (Orc Saga: Book Two) is INCOMING, and this here is your first peek at the fabulous cover art created by Melissa Stevens (The Illustrated Author). FEAST YOUR EYES (because Isolfur!!!), and get ready, because it releases October 20th!* The ebook will be Amazon exclusive, but you'll be able to order the paperback more widely.

In the meantime, mark it to-read on Goodreads, and I'll have ebook pre-ordering set up in early September, so keep an eye out for that announcement, too you can Pre-order the e-book now on Amazon! AND, if you're interested in reviewing BLOOD OF THE QUEEN in advance of October 20th for your blog and/or Amazon/Goodreads, please shoot me an email at amaliatdillin (at) gmail (dot) com, and I'll get in touch with e-ARCs when they're ready!**

I'm really excited to be able to confirm finally that YES -- HELEN OF SPARTA will have a sequel! It's in the works, and I look forward to being able to tell you more about all of that when the time is right -- for now, just rest assured that it's happening, and more of my spin on Helen's story is coming your way.

(Did you really think I was going to leave you hanging? Well -- okay, I'll admit that I might have been tempted, and I have the alternate/previous ending to prove it, but that's all behind us now, and I hope you'll be as pleased as I am with how it all comes together!)

So there you have it! All the Author news you always knew you wanted -- and now I need to get back to work so that I can keep my side of the Orc2 bargain!


*Fair warning, Orc2 is kind of the Empire Strikes Back-ish. Make of that what you will!
**The first 25 or so people to email me who have previously reviewed my books on goodreads/Amazon have dibs!
E-ARCs are offered in exchange for your HONEST review, so please DO read and review if you sign up!