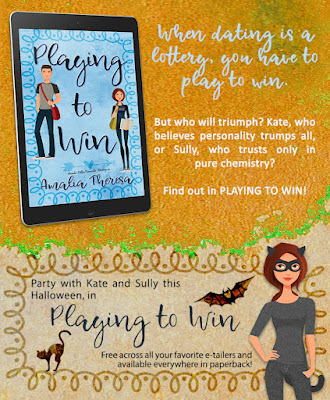 I am SO EXCITED about WINTER GAMES! It CANNOT be overstated at this point, and I'm saying that while in the midst of my least favorite part of the book production journey, too, so you KNOW this is something special!

So to celebrate and get you all ready for WINTER GAMES, book one in the series, PLAYING TO WIN is currently FREE across all your fave e-tailers!

Because the only downside of WINTER GAMES is that you'll really want to have read the first three books in the series to get the most enjoyment out of it! It doesn't matter what order you read those other three books in at all--they all stand alone! But you'll want to have read them and given yourself the chance to know these three couples individually before they all come home for the holidays this season!

HAPPILY, Playing to Win is ALSO a perfect fall read, so you can low-key gear up for spooky season and join Kate and Sully on a Halloween Costume Party adventure while maintaining a cool, blue, it's-still-summer, no rush, exterior. If that's how you roll, anyway. (Just don't pollute Sully's coffee with Pumpkin Spice--he is opposed to flavored coffees of all stripes. Pure unadulterated brews or bust! He is not, however, above sipping the Spooky Juice at said Halloween party, which is one of the greatest mysteries of his character.)

But I'm not really here to talk to you about Playing to Win, or Kate and Sully and their... foibles (content warnings on my other blog!). I'm here to tell you more about WINTER GAMES! So!! 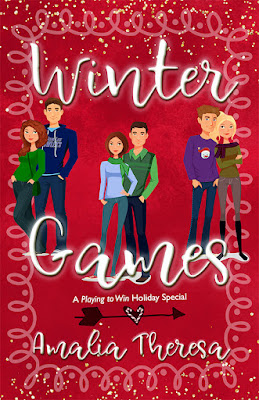 With Abe and Violet’s engagement uniting the Fowler and O’Sullivan families, Kate and Sully, and Nic and Will are coming home for the holidays to new dynamics they didn’t exactly anticipate. Starting with Violet’s plot to host them all under her own roof in the lead-up to Christmas Eve in order to give her new sister-in-law Nicole the pagan Solstice celebration she deserves.

But big holidays are never easy: Will and Violet’s dad is still holding a grudge against Nicole for stealing his son away from Fowler’s and their mom is strong-arming Violet over where she spends Christmas going forward; Will isn’t quite sure how to feel about his sister’s sudden engagement to his best friend’s big brother after missing the entire lead-up of their whirlwind romance and is starting to regret his big cross-country move; and nearly four years into their marriage with no plans for grandchildren, Kate still struggles to feel like she belongs among the close-knit O’Sullivans--especially now that Violet’s marrying in--even while Abe faces the limitations of his injury and what that means for his participation in family events.

One thing’s for sure: there’s no shortage of emotional overwhelm to go around this holiday season, but if Violet has anything to say about it, there’s going to be even more love.

A heartwarming return to Heron Lake, Winter Games takes place just a few months after the epilogue of Playing House.

For the month of August, you can pre-order WINTER GAMES for just $2.99 (ebook)--but the price goes up September 1st, and at release it'll be $4.99, so don't miss out on a great deal for a holiday special filled with all kinds of love and warm fuzzy delights!

If you're a paperback reader like I am, HAVE NO FEAR. I'm hoping, fingers crossed, to have the print edition available by mid-September. And depending on how my next print proof turns out, this might be my prettiest interior ever. We'll see! 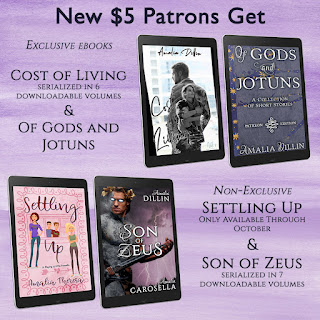 Last but not least, all my Patreon Patrons will get early access to the first two chapters of WINTER GAMES in early September! (And they've ALREADY gotten a peek at one of my favorite scenes, as well as a glimpse of what else is in store for this contemporary romance series!) Come join the fun for as little as a dollar a month!

This month is a particularly good time, because New Patrons at the $5 level are getting almost 18 dollars in ebooks (if they don't already have SON OF ZEUS and SETTLING UP already--nearly $10 in the patreon exclusive ebook editions of COST OF LIVING and OF GODS AND JOTUNS, regardless!) and ALL patrons get access to a huuuuuuge archive of goodies, including:

And a WHOLE LOT MORE bonus content and sneak peeks of what's in progress, including:

SO! Definitely check it out if you're a patreon type!

(Yes this was a lot of graphics in this post and a lot of information and I am sorry/not sorry, but it's been a VERY BUSY SUMMER and I just want you all to know everything!!!)

Amazon | Bookshop
Posted by Amalia Dillin at 11:12 No comments: