Shoot me an email at amaliatdillin(at)gmail(dot)com to claim your prize, be sure to include your mailing address, and let me know if you'd like an autographed bookplate to go with your trading cards! Thanks for playing!

If you'd like to try your luck at winning an autographed copy of Forged by Fate while you're at it, there's a comment-to-win copy up for grabs over at History with a Twist, too, to go along with my guest post regarding Eve's character, and how she came to be the woman she is in Fate of the Gods. Also, Vicky Alvear Shecter is amazing, and you should be reading her blog anyway. (If you haven't read her novel, Cleopatra's Moon, you should get on that because it is phenomenal historical fiction.)

I know I said Tuesday we'd cover more magical objects next week, but that was silly of me because I fear I must take some time off from the regular blogging for a variety of reasons including but not limited to Family Invasion, Doom, and my own desperation to finish this rewrite before the end of the month. So!

The Summer Hiatus begins NOW, and I'll be back to my regularly scheduled blogging on July 9th! There may or may not be some spotty bonus posts between now and then, but I can't make any promises because seriously this book. Must. Finish. It is Killing Me that it is not done already. Of course, if I finish before then, I'll keep you posted.

I know you understand.

Email ThisBlogThis!Share to TwitterShare to FacebookShare to Pinterest
Labels: Forged by Fate, writing

More magical objects for your reference and mine! From the Seven Viking Romances -- finishing up with the romance of Arrow-Odd, today, and moving on to the romance of King Gautrek (Son of Gauti the Boss -- Gautrek himself is kind of worthless), and then Halfdan Eysteinsson!

4) "The best of all swords" Snidil
It "never faltered in battle" owned by Odd's companion, Sirnir. That's really all there is to be said about it in the story. It isn't exactly magic, I suppose, but never faltering in battle seems pretty super-power to me.

5) Three Stone Arrows
Gifted to Odd from an old man named Jolf while Odd was living in disguise (dressed in bark) and going by the name of "Barkman." These stone arrows could only be used once, and were meant to defeat an enemy which Gusir's Gift couldn't. Odd uses them, and they disappear after taking out his enemy.

From the Romance of King Gautrek:

6) Starkad's Magic Spear
It appears to everyone else only to be reed, anad Starkad uses it to kill King Vikar in sacrifice to Odin, when Vikar would have made mockery of hanging himself to the god. When Starkad pokes Vikar in the side with it, it turns back into a spear. Magic!

From the Romance of Halfdan Eysteinsson:

7) Halfdan's Magic Sword
Gifted to him by an elderly couple in the wood who nursed him back to health, the sword "seemed to drip venom from its edges." And it ensured victory to whoever held it -- at least if they "handled it properly" it would always find its mark.

8) A Necklace of Precious Stones
Also a gift from the elderly couple -- the necklace protects Halfdan from harm, granting a certain level of invulnerability as long as the stones are whole. It's a good thing, too because half of Halfdan's enemies seem to shapeshift into dragons at the drop of a hat.

9) The sword Horn-Hilt
Owned by a viking named Val, "inlaid with gold, and its stroke never failed."

We still have four Romances to go!

TEMPTING FATE! (A Fate of the Gods Series PSA!)

Hey everyone! I'm super stoked to tell you all about TEMPTING FATE, the next installment in my Fate of the Gods series, coming August 13, 2013! It's an e-novella which takes place DURING Forged by Fate, and you can check out an excerpt over at World Weaver Press!

Mia's lived in her sister's shadow long enough. Now that Abby is getting married to a Frenchman, Mia scents freedom. In fact, Jean DeLeon, the groom's too-charming cousin, seems like the perfect place to start. But the House of Lions is full of secrets, and what started out as an exciting fling is quickly becoming more frustration than fun. Mia wants answers, or she wants out, and it isn't like she doesn’t have other options. Ethan Hastings, for example. Tall, handsome, and gray eyes like nothing she's ever seen before.

The fact that Jean seems to hate him is just a bonus.
Goodreads 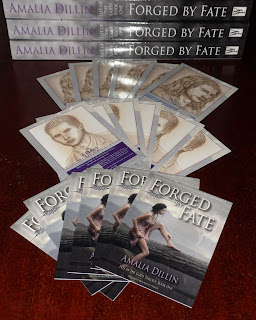 I'm sure you all remember Mia -- you know, the younger sister who drives Eve crazy in Forged by Fate? Well, I couldn't resist giving you a taste of things from her point of view. When you start reading, you'll understand exactly why.

I'm celebrating the announcement with trading cards! So head over to Goodreads and mark TEMPTING FATE "to-read" and then leave a comment on this post, and I'll pick a winner or two -- be sure to check back here on the blog on Thursday 5/23 to see who, and claim your prize! I'll send along some stickers, too, probably, because that is just how I roll. If you have a paperback copy of Forged by Fate, I'll even send an autographed bookplate. You've got until Monday, 5/20 at 11pm Eastern to enter.

You might remember Arrow-Odd's magical arrows, from our discussions about his super odd religious choices. But these arrows, (undeserved by Odd, p.s.) are just the first a great many magical objects littered throughout the Seven Viking Romances, so I thought it'd be fun to go through the catalog, just in case anyone is in the market for something in their own fiction. Or wants to go on a quest. Either/or.

Let's start with the Romance of Arrow-Odd (but seriously I hate this guy).

1) Odd's Magic Arrows, AKA Gusir's Gifts
These are the first magic objects we come across in this book of Viking Romances, and they have a couple impressive properties:
Odd uses Gusir's Gift to kill a great many people and monsters in his day, until they're lost to him in a fight against a giantess.

2) Odd's Magic Shirt
While in Ireland, the Irish manage to kill Odd's BFF, Asmund. (And don't ask me why every opponent of Odd's takes arrows through both eyes and the armpits before they even slow down, but Asmond gets struck by one arrow and drops dead just like that.) Odd flies into a rage, of course, and starts slaying everyone in sight. Then he happens upon a group of women, and one of them, named Olvor, strikes a bargain with him: Let her go free, and she'll make him a magic shirt unlike any he'll ever find anywhere else. What made it so special? Well...


"You'll never be cold in it, either by sea or land. You'll never be tired when swimming, never hurt by fire, never troubled by hunger, and no iron will bite you. It will protect you against everything with one exception" (52).

That exception is of course that if he runs away from battle, he can still be killed. Clearly it is a shirt woven with Viking sensibilities in mind. It also happens to be silk, embroidered with gold, and when Odd returns to collect his shirt, he gets a bride as well.

But this isn't the only magic shirt in the Viking Romances, either. Just the first mentioned.

3) The sword called Tyrfing
For a change, it doesn't belong to Odd, but rather his opponent, Angantyr. Two things make it special:


And we'll take a breather here, but tune in next week for more Magical Objects! Because there are a lot of them, friends and followers.

Posted by Amalia Dillin at 00:00 No comments:

I don't use that expression with any kind of frequency, but man, King Gauti, he is the definition. Frankly, I find him a hundred times more compelling than Gautrek, for whom this particular romance was named. Let me just give you a few highlights from the second of the Seven Viking Romances.

1) King Gauti hunted himself out of his clothes, chasing after a stag. That is how seriously he takes his business. He'd wounded it and lost his spear to it, and if he had to charge through the forest NAKED, he was getting it back. His clothes were getting in the way, because he was hunting that hard and  sweating up that much of a virile storm, so he just went ahead and stripped down to his skivvies and kept on going.

2) At some point around dusk, he realized oh hey, I'm kind of lost, but whatever, I'm King Gauti and a Boss. He followed the bark of a dog (still mostly naked, mind you) because he'd lost all his retainers and hunting party while he was so single-mindedly pursuing the aforementioned stag, and came upon a house in the woods. After watching a servant kill the dog  with an axe for barking and leading Gauti to the house, the king just Smiled to Himself. And when he realized he wasn't going to be invited in? It's cool, King Gauti the Boss just went ahead and shoved his way through said armed and clearly unstable servant and invited himself.

3) Let me give you a some excerpt here because this is how King Gauti rolls:

He realized that he wasn't at all suitably dressed for sleeping out; on the other hand he wasn't sure what sort of hospitality he would be offered if he waited for an invitation, so he walked up boldly to the door. The other man ran into the doorway with the idea of keeping him out, but the king forced his way past him into the house. In the living-room he saw four men and four women, but there was no word of welcome for King Gauti. So he sat himself down.

4) At this point, after barging his way unarmed and undressed into their home, and inviting himself to take a seat:

When the king saw that he wasn't going to be invited to share the meal, he took a seat at the table next to the farmer, picked up some food, and settled down to eat.

5) King Gauti the Boss then proceeds to bed himself down in their house, uninvited, and when one of the farmer's daughters approaches him in the night, offering "a bit of hospitality" King Gauti's response? "Things are looking up."

I'm not lying you guys. That is a direct quote from the book.

6) After he milks her for all the information he can about her family, including but not limited to the story of the Family Cliff (used, of course, to take long walks in the face of famine or any kind of hardship, like a king showing up mostly naked and inviting himself to dinner, which is apparently the HARDEST of times, because the farmer's already decided he's going to go ahead and die the next day, taking his wife and his servant with him), Gauti goes ahead and knocks her up in the bossest of fashions, saying:

"I can see that you're the most eloquent member of your family," said the king, "and you can rely on me. I take it you're still a virgin, so you'd better sleep with me tonight."

Friends and Followers, I think King Gauti wins at life.