I announced all this in my newsletter last week (and if you aren't subscribed already, I highly recommend that you do so!) but I'm thrilled to announce that both Blood of the Queen in hardcover and Of Gods and Jotuns in paperback have launched into the world! If you were waiting on either one, go forth and grab your copy!! 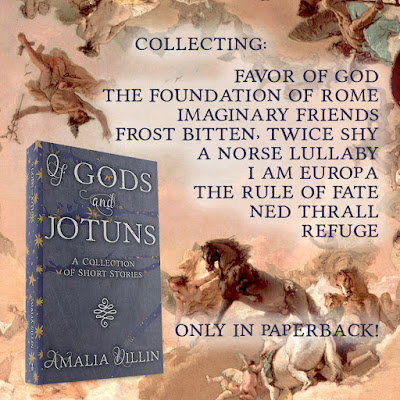 I'm also BEYOND excited to tell you all about what's coming next in my Playing to Win contemporary romance series, writing as Amalia Theresa! And it's kind of a lot!!!

First up, on July 28th, I'm releasing a novella that takes place between the last chapter of Playing it Safe and the epilogue inside that book!

Settling Up is written from the perspectives of Kate and Nic and explores how they got through the awkwardness of having both been involved with Sully and ultimately became friends with one another.

But it isn't JUST a story about their friendship. It's also a story about how sometimes the Happily Ever After that comes after a true commitment requires a little bit of massaging. Both Will and Nic AND Kate and Sully are working through the practicalities of what being together really requires, up to and including how they'll navigate things socially.

Yes, Kate and Sully did back me into the spanking corner again. (I can't take the two of them anywhere without it becoming some kind of foreplay.) And yes, there is no shortage of sexiness in this little novella. So don't worry, if that's what you're looking for in an Amalia Theresa read, I've definitely still got you covered! (Over on my Amalia Theresa website, I've got exactly what scene you'll want to skip if spanking isn't your thing, too, along with content warnings for the rest of the books if you need them.)

NOTE: If you're a patreon patron at the $5 level, you're getting access to this novella on July 7th! A downloadable epub edition coming right at you, if you're already patroned-up! If you're NOT, well, I still have a deal for you--you can pre-order for $1.99. But do it now! The price will go up to $2.99 before release day!

But of course that's not all. I also have a holiday special for you coming this fall!!

YES!!!
I have finally finished Winter Games, at last!!!!

More details on that book coming soon--but for now, go find it on Goodreads! And do make sure you're all caught up on Playing to Win books 1-3 before October!! You are definitely going to want to have read at least a couple of the first three books to get the most out of Winter Games, which picks up just about 6 months after the conclusion of Playing House! If you're a patreon patron, you've already gotten a couple peeks at Winter Games, and there's definitely going to be more to come in the lead up. And there's also two whole other serialized novels over there if getting a jump on Winter Games isn't enough of an enticement! Including the EXCLUSIVE TO PATREON FOREVER, Cost of Living, my billionaire romance. You can click over and read the first two chapters for free, patron or not, if you like!

Amazon | Bookshop
Posted by Amalia Dillin at 10:56 No comments: