Forged by Fate is **FREE** for Kindle!

Tuesday BY HELEN'S HAND released, under my Amalia Carosella name, and if you've subscribed to my newsletter The Amaliad, you already heard the news of how I'm celebrating--


FORGED BY FATE is FREE for Kindle until the 14th! 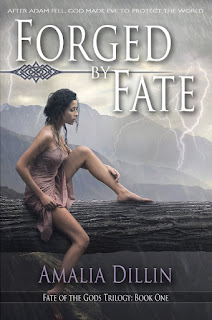 This is the first time I've offered FORGED for free, and I'm not sure when it will happen again, so take advantage while you can -- or let your myth-loving friends know, if you've already got it! And of course please do check out BY HELEN'S HAND, as well -- it's a pretty sweet two-for-one, if you ask me, and those of you who received the newsletter got a little behind the scenes look into why I'm so excited to promote these books side by side!

If you missed the first issue -- you can find out what you missed HERE, but you'll still want to subscribe if you want to read the HELEN OF SPARTA series prequel short story Ariadne and the Beast!

#NAMEthatSUITOR to enter my Audiobook Giveaway for BY HELEN'S HAND!

I know guys, I know -- I'm the worst blogger these days. But you'll find more regular posts over at blog.amaliacarosella.com right now as I ramp up for the release of BY HELEN'S HAND on May 10th, including a giveaway for a copy of the audiobook edition AND an owl pendant to match the bracelet/necklace my fabulous cover artist gave Helen on both her covers!


Klikky Klikky to head over and check it out -- and please do enter to win! It's no fun playing #NAMEthatSUITOR by myself. :P There's also a link to the goodreads giveaway which is happening NOW and I hope you'll throw your hat in that ring as well!

In other news: I finally and at last wrapped the draft for The Manuscript of Doom, which will be an Amalia Carosella title, and I hope to have more information for you guys soon on that project. But readers of Amalia Dillin!me I think will be particularly interested! I'm destroying the developmental edits with the best editor in the world as we speak. (And when it gets closer to the big day, I'll definitely be talking about why that manuscript was such a beast to write!) I've also got another bronze age historical (my Hippodamia and Pirithous book) in the final stages of production, release date TBA! I'll let you know when I have it pinned down!

Next up is Orc 3, and I'll be throwing myself into that head-first as soon as the Manuscript of Doom edits are wrapped. Believe me, I want to get Orc 3 out to you guys as much as you guys want to read it. But be on the lookout for an HONOR AMONG ORCS promotion in June, around the release of Warcraft the movie. It just seemed fitting.

Finally: Do definitely subscribe to The Amaliad and I'll deliver behind the scenes book stuff as well as the most important updates about Authors!Me directly to your inbox!

I think that's a wrap for now!