Ordinarily, Gwen likes goats, even makes her living by milking them, but these two are some kind of devil-spawn, and one of them is pawing the ground, horns aimed at her gut. The fact that they were followed by a blonde farmhand with a much too charming smile isn't all that much of an improvement, either.

But Thjalfi makes himself useful. He's lean and smart, with a warmth in his pale blue eyes that makes her shiver, and she can't deny that he has a way with her horses. He seems to have a way with her, too.

There's just one problem: Thjalfi's a slave, a bondservant to the god of thunder, Thor, and no matter how far they fall in love, he can't stay.

But this so-called god who owns him? He's about to learn just how far a Midwestern girl will go to free the boy she loves.

"In Postcards, Ms. Dillin takes an old myth and turns it into a beautiful contemporary love story. Gwen was strong and stubborn -- her reaction [...] was authentic, believable, and all together hysterical."
-- S.T. Bende, Author of the Elsker Saga

From Asgard, With Love

Another Fantasy Romance--and a full length novel--set in the same world as
Postcards from Asgard!
Amazon | Apple | Nook | Kobo | Etc 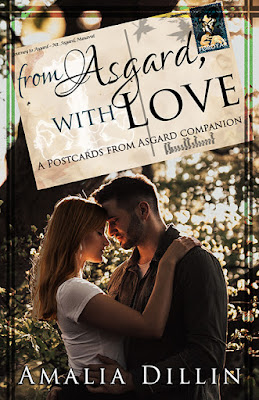 Samantha Connelly has no idea what she’s doing with her life.

That feeling leads her into the woods, where she pours a libation to a different god--a god of thunder--praying just once for a response. There’s no lightning or ominous rumbles, but she does meet a man with a bow strapped to his back and an easy smile. A man named Ullr, who isn’t really a man at all.

Unfortunately, he’s brought ill-tidings. If Sam thought her life was a mess before, it’s nothing to what’s coming. Loss and pain and sorrow hang like a dark cloud over her fate, and now that she’s called to the Norse gods, Ullr is determined to see her through it.

Maybe it’s foolish, but Sam agrees to let him. After all, with all signs pointing to ruin, how could accepting some help from the gods make things worse?

***
A perfect read for fans of Postcards from Asgard and my Carosella title, Daughter of a Thousand Years!