Affairs of the Gods: Hades and Persephone

Hi, Followers-of-Amalia! I’m thrilled to be guest blogging here today. For those of you who don’t know me, I’m Diana Paz, longtime friend of the spectacularly talented and adorably wonderful, Amalia. [Note From Amalia: Part One, which discusses Hades and Persephone individually, is over yonder on Diana's blog!]
I’m here today to discuss the topic of my current work-in-progress, the Greek myth most commonly known as The Rape of Persephone. I’m excited to share some of my FINDINGS, and indulge in the glorious research that, in part, makes writing such a joy for me. Onward we go, into the Underworld!
Hades and Persephone: A Match Made in the Underworld
In my mind, there could hardly be a more opposite goddess for the harsh and austere Hades than Persephone, goddess of innocence and springtime. Maybe that’s part of what makes this match so appealing to me. Whoever Hades married would be elevated to the status of queen, and the sheltered Persephone seemed hardly prepared to rule. Her life had been spent doing little more than growing flowers and creating beauty. But maybe that’s all Hades really needed.
So. How did this match come about? There are a few variations explaining how she was whisked off. Sometimes Eros shoots Hades with an arrow when he notices him near Persephone, just for kicks. Sometimes Aphrodite was the mastermind behind this, because Persephone was following in Athena’s and Artemis’ footsteps in becoming another virgin goddess, and Aphrodite wasn’t too pleased about having any more mortals taking vows of chastity. But sometimes Hades is the one who asks Zeus about finding a bride, feeling in need of companionship down in the Underworld. And sometimes it’s Zeus who is depicted as orchestrating the whole affair, because he believes his big brother could use a queen.
Whatever the case, Persephone is usually shown gathering flowers when she wanders away from the protection of the nymphs. She’s often out of earshot, which indicates she’s ventured rather far. Most sources tell of an earthquake, which caused a chasm to open up. Again, whether this happened naturally or because of some kind of planning is unclear, but Hades noticed the chasm, and “left his dark domains to and fro, drawn in his chariot and sable steeds, inspected the foundations of the isle. His survey done, and no point found to fail, he put his fears aside” (Ovid, METAMORPHOSES).  The details of what happened next are arguable, but whether by arrow or design, one thing is certain: the sheltered Persephone’s life would never be the same.
Here’s where my curiosity again takes over. A god like Hades, who is foremost about fulfilling his duties and making sure the rules are obeyed, doesn’t seem like the type who would up and decide to abduct Persephone. He could have courted any goddess, and certainly found someone interested in becoming a queen. So perhaps it was Eros’ arrow after all, and Hades was overcome with ARDOR and kidnapped Persephone after all, but considering what I know about Persephone, what exactly led her to stray so far? There are stories of her curious nature, particularly in opening the golden box sent to her by Aphrodite. Could she have been curious about the chasm that opened up? Most likely it was completely different than anything she’d known.
In my research, I can’t help noticing that the primary focus is often on Demeter’s distress about losing her daughter, not so much on Persephone’s dismay at being carried off by a king among gods. Little is said about her time in the Underworld, with Demeter’s year-long search taking center stage. Add to this the ambiguity about how, exactly, Persephone ate the pomegranate seeds before leaving the Underworld—was it trickery? After an entire year, Hades tricks her? According to the Homeric Hymns, yes:

…but he secretly put in my mouth sweet food, a pomegranate seed, and forced me to taste against my will. (Third Homeric Hymn).

But, why didn’t he trick her into eating the seeds sooner than this? And trickery seems pointedly out of character for a god who is so adamant about RULES. Not to mention, some sources show Persephone eating the seeds herself, without realizing:

…for the girl had broken her fast and wandering, childlike, through the orchard trees from a low branch had picked a pomegranate and peeled the yellow rind and found the seeds and nibbled seven. (Ovid, METAMORPHOSES, Book 5).

There are versions in which Hades offers her the seeds without trickery, and she takes them, supposedly not knowing what they’ll do (Apollodorus, for example), but… what if Persephone took the seeds of her own free will? Persephone, having spent an entire year in the Underworld without eating the food of the dead, might have known that something would happen if she did. It seems possible that when Hermes came to deliver her to the sunlit world, maybe she did something rash. She might have missed her mother, but she didn’t mind her life as queen, either. The Underworld could have been a kind of freedom for Persephone from her mother’s overprotectiveness. I can’t help but wonder if she hoped to return.
Like most mythology, there is a lot of room for speculation. I feel like I’ve covered the bases, but maybe I’m way off. Is this simply the abduction of an unwilling goddess and nothing more? Was she a woeful victim sent to the Underworld each winter, longing for the light, or did she return the unlikely affection of a god who wanted nothing more than to make her his divine queen?
~ ~ ~ 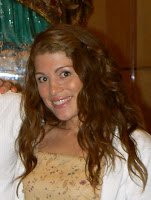 Diana Paz is a web content writer and aspiring author. She was born in Costa Rica, grew up on Miami Beach, moved to Los Angeles in high school, and went to college in San Diego. Basically, she's a beach bum, but she did graduate from California State University, San Marcos with a Bachelor's Degree in Liberal Arts. She loves old movies, epic fantasy, all kinds of music, and heading to the beach with a good book. Preferably sipping a caramel frappuccino. Find her at her blog:dianapazwrites.blogspot.com or on Twitter @dianapazwrites
Posted by Amalia Dillin at 00:01