An Interlude of Cats (II)

No mythology here, unless you count Family Lore and pet ownership. I just need to record some Cat-Love for posterity. So if you don't care about my history of cat-ownership, I won't be offended if you want to skip these next couple of posts!

Cat II
My second cat was a black domestic short hair. She was a year old when my parents brought her home from the shelter while I was away at college, and she had lived the previous nine months in a cage, waiting to be adopted. We were given the impression that she was near the end of her time with them, one way or another. My mother chose her, and named her Sophie, for Sophia, for Wisdom. 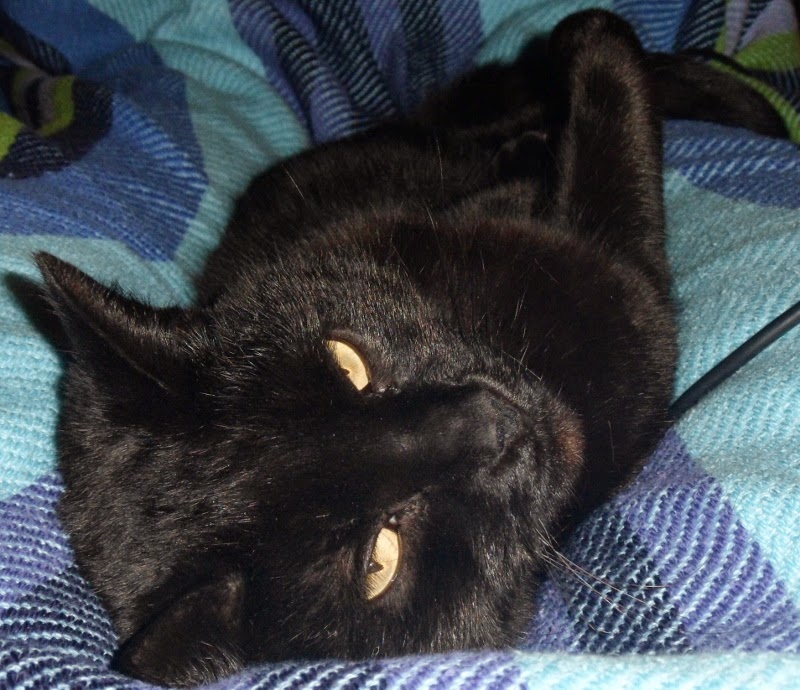 Sophie was maybe the exact opposite of what you might hope from a cat named for the divine feminine aspect of God. She was clumsy and dopey and utterly ridiculously adorable, in her own goofy exasperating way. She started out as my mother's cat, then through a series of circumstances, became more my father's, and finally, ultimately, eight years later, mine. Well, mine and El Husband's.

Sophie moved in with us in the fall of 2012, because my parents were moving and worried she might make an escape in all the excitement, and we desperately needed a cat to keep the mouse population under control in our house. Somehow, I had forgotten how much joy having a pet could bring. How much joy a cat could give. Sophie became my little black shadow. Where I went, Sophie followed. Upstairs, downstairs, from office to living room, through the dining room to the kitchen, while I ate. While I wrote, Sophie would sit anywhere from near me, to next to me, to on me -- depending on the season. She was very well-mannered, only getting into a little bit of trouble, now and again, and having the courtesy to wait until we'd left the room before jumping on any tables or counters to lick the olive oil bottle, or bask in the warmth of an accidentally left on burner. When she wanted attention, she asked politely. A gentle tap on the arm with one paw. Of course, if you didn't respond appropriately, she would impose herself on your lap, crawl down onto your shoulder, or stuff herself under your chin, depending on the season and the degree by which you had reclined.

She was a very timid cat. Easily startled by people and loud or sudden noises and/or movements. The arrival of guests, or the ringing of the doorbell, often sent her fleeing into the basement. Even when it was someone she knew. But in the time she spent with us, she started to find some courage. Coming upstairs while my nephew was visiting, for a few brief moments, to sniff at him or bump her head against his hand before disappearing again to safety. She loved to sit in her cat tower and watch the birds at the birdfeeder, and stare down the chipmunks on the back step. She even learned to mouse, a little, though she was just as likely to get bored and fall asleep if one hid long enough.

Sophie ran to greet us in the morning when we got up, and when we came home from shopping trips, and frequently engaged in anticipatory purring. All it took was a glance in her direction, and she'd purr away, loud and long and happy. Even when she was too sick to walk straight, she was determined to jump up into my lap and sit with me.

We said goodbye to Sophie at the end of March, this year. She was maybe 10 years old, and it was by far the hardest thing I've ever had to do in my life -- making that decision to let her go. Making all the smaller decisions regarding what was best for her, and how to handle her condition. Spending my days taking care of her, and coaxing her to eat, or even to come out of hiding at all.

She was such a small cat -- only 7 lbs at her weightiest -- but she left a monstrously large hole in our lives, in our hearts.
Posted by Amalia Dillin at 00:00