A (re)post of illustrated evidence, because really, I'm not sure the 15th century was a good look for anyone. Here are a few examples of why:
The woman in red is the queen consort of France, I guess, Queen Isabeau, who I am told is, herself, Bavarian. The sleeves are pretty wicked but seriously the rest. I may be put off in part by the shaved gleaming white pasty forehead look and the crazy horned headdresses also, if I am being honest here. But I do kind of love the patterning on the red fabric so. There's that? I would so trip over those skirts all the time, guys. all the time. And speaking of tripping over things... 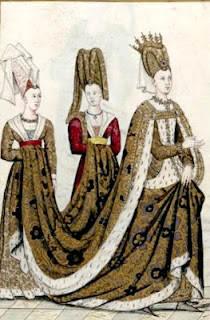 Another of the Queen (from wiki commons, natch). Talk about fancypants. How did they keep dresses like that clean? I mean really. I had a train on my wedding dress, and my white skirt was scuffed and dirty within 40 minutes of putting it on, even though I tried to keep it draped over my arm for 30 of those minutes. I'm just saying. Impossible.
So maybe not everyone was as crazy as the French, hm? Maybe there were better looks! BEHOLD THE SPANISH! 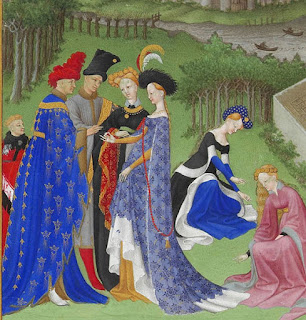 (from wiki commons)
These dudes, dudes. Those robe-like things! But I have to admit, that woman in the background with the black and blue and white dress is pretty sharp-looking, and if I had to pick one of those dresses to look kind of pregnant in (because seriously they all look like they are a little bit pregnant), it would be that one.
And only that one.
Lest you believe the lower classes had any kind of better deal in fashion, let me just give you a glimpse of what every man was wearing under those super long and ornate robes.

And now you know.

There are days I curse myself for including this particular period in the history of my novels. Thank goodness Eve can defy convention and skip the headdresses of doom when she's at home. And if you're curious how I made this all work when it came time to take the clothes OFF for some romancing, be sure to grab a copy of TAMING FATE, which is releasing as its own novella in paperback and ebook on June 24th, and tells the story of Eve's marriage to the Marquis DeLeon in 15th Century France! With some divine guest stars, of course. Mark it to-read on Goodreads today!

There also might have been something to do with rats and fleas involved in the production of this novella, too, just in case that's more interesting to you...
Posted by Amalia Dillin at 00:00