Notes from the (re)Writing Cave, and an Orc Saga Teaser

I'm back in the saddle, going through my manuscript for some extensive reworking and rewriting -- I've already cut 13,500 words or so and added back in about the same amount, and I'll be rewriting the last 100 pages more or less entirely. These next two months are going to be a whirlwind of writing, rewriting and revising, punctuated by my trip to Denver for the HNS conference, which means it's time for the annual summer hiatus!

Fear not loyal friends and followers -- with any luck, I'll be back mid-August, and I'm tentatively planning for a new game of #NAMEthatBUTT in the fall, (assuming I can relocate the lost butts required!)

Enjoy your summer festivities and be sure to check back in when I return, because I'm hoping with fingers crossed times a million to maybe possibly hopefully perchance have some authory news, for all you wonderful readers and fans who have been waiting oh-so-patiently for me to talk about what might actually be coming next in some kind of firm manner. (Oh, Publishing!)

In the meantime I'll leave you with this small teaser of Orc Saga: Book Two, because I can't make any promises at all quite yet -- 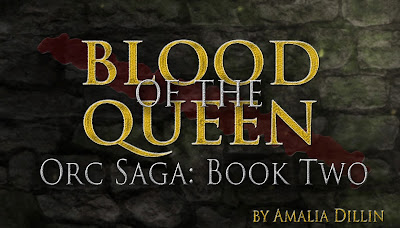 “What are you?” Ragnar demanded.

Bolvarr forced himself to relax, forced his limbs to assume more of a lounge against the stone at his back, than the miserable crouch he’d suffered since moonset. “What do I look like?”

Ragnar grunted, pacing slowly around him, as if to get a better look. “Seithr, by the marks on your face, but you’re strange even for their kind. And everyone knows no Seithr woman would teach a man her arts.”

“Maybe my mother made an exception.” Bolvarr shrugged, causing the chains to clank together. He had no idea what the Seithr were, but he could only assume they were witches of some kind.

“That green skin is something else. You’re too pretty to be orc or dragonkin, so I suppose you’ll tell me it was the work of some potion.”

“Not at all,” Bolvarr said, pretending boredom.

“Cursed.” He tipped his head back against the wall and closed his eyes. Men or elves, it always came back to the shade of his skin. The imperfections of his form. He was the closest the Hrimthursar had come to redemption, and it wasn’t anything near good enough. How he’d believed for a moment they’d think him human in the dark was a question that was likely to mock him until the end of his days. Which, it turned out, might well end up being far sooner than he’d anticipated. “By the Ancestors.”

Ragnar snorted. “Cursed or not, you’ll make a fine gift for the king. And if the Ancestors smite him for holding you, all the better.”

“And why’s that?” Bolvarr asked, lifting one eyelid to watch him make his way back to the door. A handspan thick, and reinforced with iron bands, not that he could reach it, chained as he was.

“Because he’s standing in my way.” And then the door swung shut with a thump, taking the torchlight and Ragnar with it.