The Trouble with Castor and Pollux

As I'm rewriting HELEN, I find myself completely at a loss as to how to handle Castor and Pollux, Clytemnestra and Helen, as far as birth order and immortality/mortality goes. There are so many conflicting accounts as to paternity, and so many conflicting accounts even of how they were born-- but the one thing that pretty much everyone agrees on (cross-culturally even!), is that Castor and Pollux are twins. 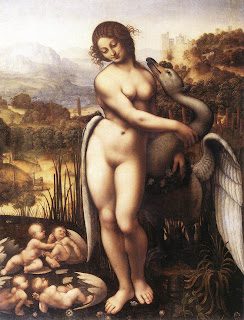 Now, in itself that isn't necessarily problematic. But it becomes so, when you take into account the mythology of Pollux being a demi-god, a child of Zeus along with Helen. Now, unless Pollux and Helen were born at the same time-- be it by egg or not-- one has to ask, how many times was Leda raped by a swan? And, after the first time, isn't it kind of odd that she'd fall for that same trick again? Or did she solicit Zeus for round two, and if she did, was it with Tyndareus's permission and approval?

In combination with this, we also have the issue of inheritance. It's Helen's marriage which puts Menelaus on the throne of Sparta/Lacedaemon, not Clytemnestra's. Does this mean that Helen is the oldest daughter, or the first born of a twin pregnancy? Are Helen and Clytemnestra (which by the way, I find it HILARIOUS that Microsoft Word never questions whether that name is misspelled), older than Castor and Pollux? Since Helen's mythology specifically relates to the rape of Leda by the swan, I'm inclined to think that her conception was Zeus's first offense in that regard.

The easiest solution is probably to give Leda quadruplets, but I'm curious about the conflicts and stresses it might put on the situation if Leda had carried on more than one affair by Zeus, by choice or otherwise. Was the first time a swan seduction, and the second time Zeus took on the guise of Tyndareus (not unheard of)? And if so, how is Pollux identified as a demi-god rather than simply the son of his father the king? Coloring and appearance? Do demi-gods mature faster than normal mortals--or is it just his stature which proclaims him a hero? Demi-gods do seem to be physically larger than normal people, to some extent. Strength, Stamina, Some Special Ability? What differentiates Pollux from his brother Castor? The other trouble with following the quadruplet myth is that Castor and Pollux, were responsible for liberating Helen from Athens after Theseus kidnapped her-- if they were all born together, and Helen was stolen so young, how did Castor and Pollux manage that at so young an age, themselves? (Mind you, Theseus' abduction of Helen was somewhere between her 7th and 12th birthday. I've stretched the age a bit for my book, but I have a hard time believing two 7 year old boys riding all over Greece and rescuing their sister.)

My first impulse on rewriting was to rearrange the pairings, and make Helen and Pollux twins, with Castor and Clytemnestra coming later. But after re-reading the myths, I don't think I can get away with it. Castor and Pollux are just too well known as twins EVERYWHERE, but if they were born with Clytemnestra and Helen in eggs, aren't they not twins, technically, but now quadruplets? Helen and Clytemnestra certainly are not bonded in mythology or in the stories surrounding them the way that Castor and Pollux are. They don't have the same closeness of relationship, where they can't bear to be parted even by death. Some of that might be attributed to the fact that women had less control over the lives, maybe, but I'm not so sure that's all it is.

Still, it doesn't really suit my purposes in this book for Pollux and Castor to be younger than Helen, and making her a twin of Clytemnestra (or a quadruplet) could allow for more conflict between the sisters. I wonder if Clytemnestra regarded Helen's paternity to be an accident of birth? Or, was Clytemnestra born first, but her claim of inheritance usurped by Helen's obvious divine lineage? Are Helen and Pollux the favorite children of Leda? Does Tyndareus prefer Castor and Clytemnestra? I wonder if Leda prefers the children who are not Zeus's, because they do not remind her of the circumstances of Helen and Pollux's conception.

I really do wish I could just make Helen and Pollux twins. Since I can't, I think I have two choices:

1) Leda is raped/seduced/tricked somehow a second time by Zeus and bears two sets of twins a year or so apart-- and if I work with the established idea that Zeus perhaps assumed Tyndareus's form the first time, then I could even make Castor and Pollux the older pair of siblings, Helen and Clytemnestra the younger and the result of the rape by the swan. Of course, there is no hint in any of the myths that Zeus raped Leda twice, and that is a definite drawback, however convenient it might be to employ such a device. On the other hand, it isn't totally out of the realm of possibility either--there is certainly plenty of precedent. It solves the problem of the boys rescuing Helen quite neatly if they are a few years older than she is, too.

2) Quadruplets, born in two sets, with a lull of labor in the middle between the girls and the boys. I suppose it doesn't matter who comes out first then, and the precedent of the story is already present in the myth of the two eggs, later addition or not. I can't quite bring myself to hatch these kiddos from eggs, honestly. That's too fantastic for the rest of the story to support.

Now, I just have to choose which premise I want to work from! Feel free to weigh-in below, in the comments--what makes more sense to you? Quadruplets, half of which were born of Tyndareus, the other half of Zeus's rape? Or a second deception resulting in a second set of twins? AND! What do you do when the historical facts (I use the term historical here loosely) create contradictions for your story?

Conveniently, there's just been a post over at Scienceray about how twins are born, if you're interested in the scientific elements. My favorite part is this quote:

I just thought it was fitting to mention, since it popped up coincidental to this mythological twin crisis in my book. And I never realized that non-identical wins could have different dads! Very interesting!

**Picture from Wiki-Commons: Leda and the Swan, by Cesare da Sesto, modeled from a lost DaVinci.
Posted by Amalia Dillin at 00:01


Fate of the Gods!