This is going to be shock to all of you, I'm sure, but when it comes to mythical beasts, I am not really up on my stuff. I don't know how that facet of my education has been neglected all this time. I guess I just find them less interesting than the actual people involved. I'd rather write about Theseus and Ariadne than the Minotaur, and I'm more interested in Pirithous and Hippodamia than I am the centaurs. 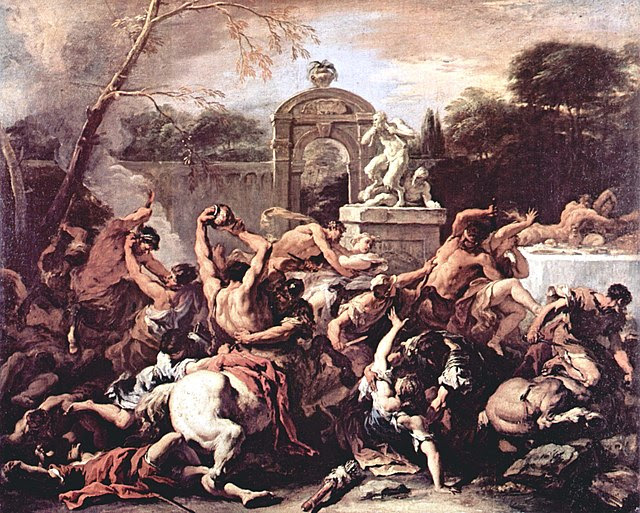 But the war between the Lapiths and the centaurs isn't something that I can overlook in Pirithous' life. Not just because it's one of the few stories of Pirithous that has survived, but also because I can't imagine it not shaping the person he is or his rule as King of the Lapiths.

The war didn't just affect him. It wasn't a personal attack on his wife alone. The centaurs went after all the women who were present, crazed by lust and wine. How many of his people suffered that day, because of his choice to invite the centaurs in the first place? How many women died? How many husbands grieved over the ruined bodies of their wives, and how many children were left orphaned, their mothers taken and their father's killed in the fight? How many women, after being practically gang raped by manimals, went into shock, or were trapped in the nightmare of that day, reliving it every time they heard the clop of hooves, or the thud of hoof beats?

It isn't, necessarily, what happened during the war that matters, either. But what about after? How did Pirithous respond, as a man and a king, to the affront against both his wife and his people? In an age of blood feuds and wars over cattle raids, did it mean the end of what friendship there had been between the centaurs and the Lapiths? Did Pirithous take revenge, beyond the lives lost during the wedding feast?

But it means that I have to look up centaurs. And it also means that I have to figure out the answer to less interesting questions. Like, do centaurs prefer clubs when they fight? And of course the age old wonder: is a centaur front heavy -- how much does a human torso weigh vs the head and neck of a regular horse?

Let me tell you, finding answers like that are not quite as easy as you might think. It also means that the blog will probably have a real post about Centaurs coming soon. Maybe.
Posted by Amalia Dillin at 00:01