Herodotus says that Paris and Helen make it to Troy in 3 days. Herodotus is a liar, and here is the proof! 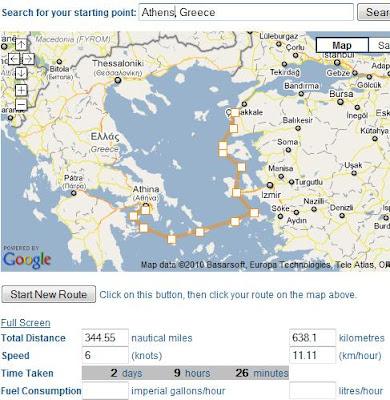 Now, I know that this is a route from Athens to Troy, so keep in mind that it is about 18 hours from Sparta's port to Athens at top speed (9 knots). Even if they cut some time off by not going all the way in to Piraeus, you're looking at some additional hours on top of the 58 hours already accounted for by my not so scientific, but roughly accurate route!

The problem is, sea going vessels in this time period had to hug the coasts to get anywhere since they weren't made for the open waters. If a boat was blown into open waters and lost sight of the shore, it was probably lost forever (See the comments for more on this discussion!). As a result, it took a while to get places. Assuming Paris and his crew rowed/sailed for 12 hours a day (which is probably assuming a lot) we're talking about 5 days of travel. The trip only gets longer if they ran into ANY kind of complication on the way. So three days to Troy? Improbable. Even if everything went perfectly. 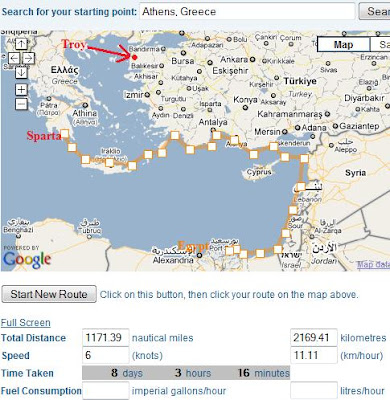 There's also a story which says that Helen and Paris stopped in Egypt on the way to Troy-- Euripides even claims that Helen spent the entirety of the war in Egypt. Supposedly, they stopped in Egypt to throw off pursuit, or even to ask for help from Pharaoh. Once there, Pharaoh either refused them, or, offended by Paris's behavior, took Helen into his own custody to return her to Menelaus. The truth of the matter is, Troy by way of Egypt makes little to no sense at all. The proof is on the map!

Not only would a trip to Egypt from Sparta take a solid month, but as you can see, there is no way to go to Troy by-way-of Egypt. It's way out of the way in the opposite direction. I guess it would throw people off the scent, sure, but it seems like a long way to go to accomplish it, and since they would no doubt need to stop on the way back to Troy for supplies along the way, and to spend the night, it would only spread the news of their elopement all over the Mediterranean.

As for Menelaus's return at the end of the Trojan war, again by way of Egypt-- well. If he was blown that far off course, he's lucky he lived at all. He was much more likely to be smashed to smithereens against some cliff-faced-island, and if that didn't kill him, the expanse of the Mediterranean ocean that he would have needed to cross without much in the way of necessary provisions like fresh water and food would surely do the job. If he went by way of Egypt back to Sparta on purpose, I'm only surprised that he had a throne at all when he got there (seven to ten years later on top of the ten years the war took) with Helen in tow.

So there you have it. And all I have to say, is thank God for the gods, or my plot for the sequel would have just gone to an early grave.

(if you want to calculate your own routes around and about by boat, this is the best tool to do so! Just plug in the average speed and it tells you exactly how long it would take to travel! I used it for all my calculations above.)
Posted by Amalia Dillin at 00:01