I've been thinking about Bonnie and Clyde for a few weeks now, mulling them over in my mind as historical figures and the larger than life characters they became, afterwards. I have two characters who very, very, very much fit into a Bonnie and Clyde mold. So I started doing research-- and as usual, this close to NaNoWriMo, I started with Wikipedia. NEVER ever my only research tool, but good for an overview, I find, for a topic I know very little about, and the first thing I absolutely had to know about Bonnie and Clyde was when they died. 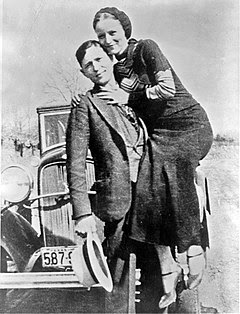 As it turns out, the date of their death fits perfectly within the period I'm working inside for my NaNo project: May, 23, 1934. Bonnie and Clyde were gunned down in their car by a posse of law enforcement officials who had grouped together for the purpose of catching them. Clyde, it appears, fell into the category of shoot on sight, but Bonnie, who had never killed anyone, was another matter. I suppose I can understand why the officers elected to shoot first and ask questions later, but I'm not sure I can make sense of the sheer number of shots fired, or the manner in which the whole debacle was treated.

I can not, for example, understand how any governing body felt it was acceptable to give away Bonnie and Clyde's possessions to the posse that hunted them down, instead of returning their personal effects to their respective families. I can not, for example, understand how people mobbed the scene and attempted to cut off body parts for souvenirs after Bonnie and Clyde were killed. I can not understand why multiple head wounds, and even more multiple body shots were necessary to kill a woman who had never killed anyone herself, even if she was an accomplice to Clyde's criminal acts. I can not understand why, criminal though they certainly were, we chose as a nation to deny Bonnie and Clyde a trial by jury and the basic right of innocent until proven guilty.

Not to say that there is any doubt as to their guilt, but I'm flabbergasted by the contradiction between, on the one hand, treating them as romanticized folk anti-heroes, famous and larger than life, superhuman, and on the other hand, something to be exterminated. This dichotomy between celebration and disvaluation of what still is, no matter what their sins, human life, kind of boggles my mind.

I wonder if what captures our attention and sympathy in regard to Bonnie and Clyde is not that they were criminals, but that the account of their deaths seems just as criminal as the acts for which Bonnie and Clyde themselves were summarily executed. Couldn't Bonnie and Clyde have been shot to injure and incapacitate, rather than wholesale slaughter, so that they might be tried and convicted? Or if Clyde was too dangerous to be kept alive, what reason did they have for shooting Bonnie a reported 26 times?

Bonnie's character itself is kind of fascinating, too, in that she seemed to be an accomplice, but not so much of one as to kill herself, and yet, she was still painted as a murderer. I kind of wonder if part of the reason she was gunned down with Clyde was because she was such an aberration. Perhaps society did not want a woman who ran around with a bunch of bank robbers, glorifying a life of unmarried and illicit behaviors, to be let off? Was Bonnie herself a threat to the status quo which kept women, at that time, still to a large degree under the control of their husbands or fathers?

Mia pointed me to this book, My Life With Bonnie and Clyde, on Amazon. I might have to go see if there's a copy at the library, or order it and see what Clyde's sister-in-law (another member of the gang) felt about all this. From the excerpts I read,  there seems to be a certain level of desperation to that time in her life. And for all of the terrible things they did, a very real sense of family loyalty and affection among them.

So why couldn't we be at least as human in apprehending them?
Posted by Amalia Dillin at 00:01