If you missed part one, don't worry, it's sitting just below this post on the main page, and it covers the FIRST creation story of the Norse Myths: the creation of the gods themselves.

I am, uh, somewhat overly familiar with the Christian Genesis at this juncture, and if I ever have to see the creation story again it will be too soon. But for the purposes of this post (covering the Norse Adam and Eve), I figure a little bit of contrast might be nice, so I'll make the sacrifice of revisiting it for all of you! 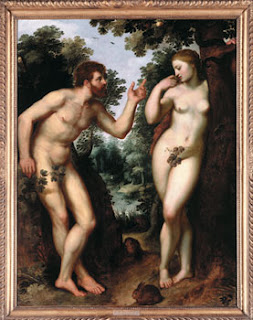 First, as previously mentioned, Adam and Eve (image from wiki commons by Peter Paul Rubens*) are made twice. Once, together and last after the creation of all other life, unnamed, and a second time as Adam and Eve, with Adam having been made first, all other animals created for the purpose of his companionship, and Eve finally made last from Adam's own body. (do I need to quote? okay, okay, fine. I'll quote**. Under the cut.) The Norse on the other hand, divide their creation twice in a different way, they have a creation/spawning of the gods themselves followed by the creation story of the ancestors of man (and, uhm, giants. They also have a flood by the way, but this post is already way too long).


Now it is said that when he [Ymir] slept, a sweat came upon him, and there grew under his left hand a man and a woman, and one of his feet begat a son with the other; and thus the races are come; these are the Rime-Giants.

Reading direct from the source, it seems unclear to me if the first man and woman sprung from Ymir's armpit sweat (seriously) were giant and giantess or simply men. The addition of "these are the Rime-Giants" I suppose is meant to clarify that issue. But it is still the creation of A people (enemies of the Aesir and to a lesser extent, man), if not OUR people. And maybe it doesn't qualify completely as a creation story, since they're more spawned than MADE. But there is no mistaking the second account, which is far more vivid and detailed in its description (much like the second Genesis story).


'When the sons of Borr [Odin, Vili, and Ve] were walking along the sea-strand, they found two trees, and took up the trees and shaped men of them: the first gave them spirit and life; the second, wit and feeling; the third, form, speech, hearing, and sight. They gave them clothing and names: the male was called Askr, and the female Embla, and of them was mankind begotten, which received a dwelling-place under Midgard.

Another account of this creation of Askr and Embla is mentioned in the Poetic Edda (Völuspá):


17. Then from the throng | did three come forth,
From the home of the gods, | the mighty and gracious;
Two without fate | on the land they found,
Ask and Embla, | empty of might.

It's clear Snorri took from this previous accounting for his own version in the Prose Edda. I can't tell you why he changes the names of the gods involved though. It's entirely possible he had a different source to work from that we no longer have today and chose those names within it as more correct for some reason, though the Prose Edda quotes already quite a bit from the Poetic Edda.

What's fascinating to me, in regard to the Norse creation myth, is that there are two distinct forms of creation related. The spontaneous-big-bang-spawning, and then the later physical creation of another race involving the gifting of spirit. The other fascinating part of the whole thing is how much more neatly the Norse creation stories fit into our modern and scientific view of how the world came into being (And the Norse Mythology Blog has an interesting discussion about THAT as well, for further reading).

It's kind of fun to see the parallels, but I have to admit-- reading Norse Mythology requires something of a sound stomach. Over all I think I prefer Noah and the Ark to an entire race of giants being drowned in blood.

*Incidentally, Peter Paul Rubens is the only painter I've come across who paints Adam and Eve in an even remotely attractive manner, imho. This particular painting appeals to me even more because it almost seems as though Adam is the one engaging in the seduction. His Garden of Eden with Jan Brueghel is my twitter background, and you might recognize my blog and twitter avatar as being taken from this Adam and Eve painting.


**really, personally, not impressed with the King James Version. But I'm even less impressed with NIV, and other than the copy of the Tanakh on my bookshelf, I'm not sure what the best translation of the Hebrew would be to use, and don't want to give you something inferior I got off google.

So. King James via Sacred Texts, you get. From Genesis:


(1:26)And God said, Let us make man in our image, after our likeness: and let them have dominion over the fish of the sea, and over the fowl of the air, and over the cattle, and over all the earth, and over every creeping thing that creepeth upon the earth. (1:27) So God created man in his own image, in the image of God created he him; male and female created he them.


(2:7) And the LORD God formed man of the dust of the ground, and breathed into his nostrils the breath of life; and man became a living soul. (2:8) And the LORD God planted a garden eastward in Eden; and there he put the man whom he had formed. [...] (2:20) And Adam gave names to all cattle, and to the fowl of the air, and to every beast of the field; but for Adam there was not found an help meet for him. (2:21) And the LORD God caused a deep sleep to fall upon Adam, and he slept: and he took one of his ribs, and closed up the flesh instead thereof; (2:22) And the rib, which the LORD God had taken from man, made he a woman, and brought her unto the man. (2:23) And Adam said, This is now bone of my bones, and flesh of my flesh: she shall be called Woman, because she was taken out of Man.