Affairs of the Gods: Zeus and Leda

To say that Zeus has a reputation for raping and seducing women would be an incredible understatement. You really can't turn around without hearing about some woman Zeus* made off with/made love to/brutally raped in the guise of some animal or other in Greek mythology, and Leda is really no exception.

The story is that Leda (perhaps laying by a stream) was hanging out when Zeus came to her in the guise of a swan (possibly fleeing from an eagle who may or may not have been Aphrodite, or else perhaps chasing after a goose-who-was-Nemesis), and when Leda took him into her arms, he ah-- took advantage of her. From there, Zeus took off, as is his usual MO, and she went home to her husband Tyndareus, King of Sparta**, and, uhm, engaged with him, too.

But Zeus in the form of a swan consorted with Leda, and on the same night Tyndareus cohabited with her; and she bore Pollux and Helen to Zeus, and Castor and Clytaemnestra to Tyndareus.***

Consorted.
Raped.
Seduced.
Really, it's hard to say what kind of relationship Leda had with Zeus-the-swan. Obviously to catch the eye of Zeus, Leda must have been some kind of beautiful. But I don't know that being beautiful does anyone any favors when it comes to the gods.

Isocrates offers this opinion on Zeus's relations with Leda (and other women):

[...] and in the guise of a swan he took refuge in the bosom of Nemesis, and again in this form he espoused Leda; ever with artifice manifestly, and not with violence, does he pursue beauty in women.

It just sounds a little bit idealized to me, is all. Zeus never struck me as a very considerate lover. He is after all a god, and I'm sure felt he was well within his rights to take whatever he wanted from whoever he wanted, and if that meant making a--ah--deposit in someone else's wife or daughter, I'm not really convinced he was interested in doing said woman any favors in the process. And he wouldn't really have had the time, anyway, with Hera sniffing around, ready to punish him, the poor woman, or both. 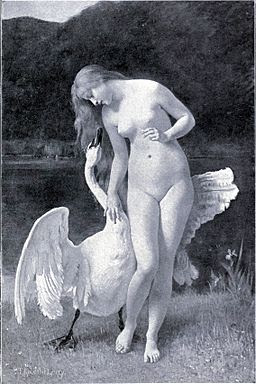 Ovid gives us a few lines, capturing a very romantic view of Leda's experience as well:


Whilst the soft snowy swan sate hov'ring o'er her breast,

What's really fascinating about the mythology of Leda and the Swan, is how obsessed with it artists seemed to become in much, much later history! We have a TON of imagery reflecting the myth. Why is it so interesting? What makes it so captivating a subject? I'm not sure I have any kind of answer to those questions, still. Certainly I don't find Leda anywhere near as interesting a character as Helen or Pollux or even Tyndareus. But I do wonder if being a reputed beauty herself--beautiful enough to catch the attention of Zeus!-- Leda bore a certain amount of jealousy toward Helen.

So why do you think Leda and the Swan captured the imagination of artists?

(I've talked a little bit about the mythology of Leda and Zeus in the past, concerning the births of Pollux and Helen in my novel.)

*To be fair, the same could really be said of Apollo. Holy Buckets.
**and interestingly enough, though Sparta was afterwards inherited through it's women, it seems like Leda married into the Queenship of Sparta, going off of Apollodorus (3.10.5).
***The Greeks were all about giving people two fathers.
Posted by Amalia Dillin at 00:01