Happy Release Day to SON OF ZEUS, available now in wide release--digital and paperback--and an exclusive to Amazon hardcover edition! Your HELEN OF SPARTA fave Pirithous is back! But this time, he's adventuring in the world you know! 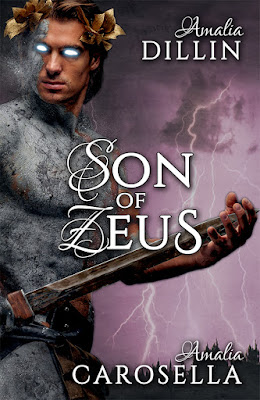 Hunted by centaurs sent by Hades himself, Pirithous is a danger to more than the woman who’s taken him in, and even for love and the help he needs to repay his debts, it's hard to justify the risk. Pirithous must find a way to work around the threat of his gods and the complications of the modern world to become the man and the hero Thalia deserves. Unless he’d prefer to return to the Underworld—without any hope of coming back.

Let me lay out all the links for you in case somehow you have not heard me shouting about this already:

It should land on indiebound soon, too. It just takes a little bit of time for the paperback to propagate through the digital mainframes! In the meantime--

And if you're still not convinced, you can listen to me talk about writing SON OF ZEUS and Pirithous in the Modern World over yonder on the Kingdom of Thirst podcast!

If you've already read SON OF ZEUS, please do consider dropping a review wherever you do that sort of thing! It's a huge help to my authorself and boosts the visibility of the book for other readers to find!

I'm just really relieved and happy and excited to finally set this book free into the world--I hope you'll show Pirithous the same love in SON OF ZEUS as you did in his first appearance in HELEN OF SPARTA and his adventures in TAMER OF HORSES, too.

And don't forget, the AMALIAD is back up and running! This month's issue already went out, but you can read it here and subscribe so you won't miss the next one!

Email ThisBlogThis!Share to TwitterShare to FacebookShare to Pinterest
Labels: Pirithous, Son of Zeus