What have I been doing?

When that happened, I decided I need a better visual representation of my work--because not all my releases end up in a physical form to help fill out that vanity shelf. And because I know that there are periods of extreme productivity and also fallow times, and we've been in the midst of a major life-altering pandemic, I went back to 2019 to make my graphic so I could see the larger shape of my work over the years, rather than just looking at the recent past.

And on the first version of this graphic? I, of course, forgot a title!! So I had to go back in and edit, and this (slightly off-kilter image) is what I ended up with: 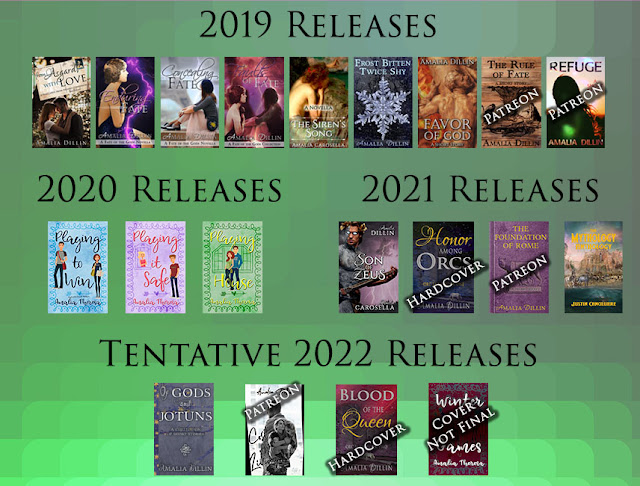 2019 was a banner year, unlikely to be duplicated anytime soon because I pulled so many short stories from the archive for Patreon--basically the entirety of my catalogue of short stories that were worthy of publication at all (because let's be real, my earliest works were not all gems!).

In 2020, I launched AN ENTIRELY NEW PEN NAME and did all the production for THREE FULL LENGTH NOVELS, during an unprecedentedly horrifying pandemic! Nothing to sneeze at there!

In 2021 I produced and released a novel I've wanted to get out into the world for YEARS and started the process of recovering and reformatting the interiors of my Orc Saga books, which I've been wanting to do for SO LONG but never had the time or resources to get done, and dropped what might be the last good short story from my banked works on Patreon, AND rereleased a 2019 previously Patreon exclusive story as part of a print collection as a fundraiser anthology for a local writers' group. During a year that threw literally every possible curveball in my direction! If the end result was just one novel and one hardcover edition of a previously published novel and one anthology copy on my shelf to show for it, I think that is still pretty solid work!

My plans for 2022 are not set in stone and might still change--because of the nature of the way I work now, I jump around a lot, and with *gestures at the world* it's that much harder to stay focused. But COST OF LIVING is already in process and well on its way to completion, with every post scheduled out to the finish, so if you're on Patreon you're already getting an entire book from me (for which I did all the editing and production work in 2021), and I have the print proof of OF GODS AND JOTUNS sitting on my desk right now, which will collect basically all my Amalia Dillin short stories (those unrelated to my Fate of the Gods series) in one paperback volume. I'm debating doing a hardcover for the hardcore fans--drop a comment if you'd be interested!

I am fighting hard to wrap up drafting WINTER GAMES for a release this holiday season, but February got the better of my wrists, which has necessitated some time off from everything, so my fingers are crossed hard but right now that work and the BLOOD OF THE QUEEN hardcover are the things I am most worried about getting done. THAT SAID, it is only March 1st so I feel like I have time to make progress--to keep making progress toward all these goals.

Now you know what I've been up to for the last three years, and what I'm (tentatively) planning for this one--keep in mind these are just releases, not everything I'm working on behind the scenes (like Orc3 and a Cinderella retelling set in the Orc Saga world, querying a Trojan War novel and writing an Aethra and Poseidon short story as Amalia Carosella, which will likely be expanded into its own novel, which I've already bare-bones outlined, and I can't forget my Heracles book, either, of course.) So if the thing you're waiting for isn't included in the graphic, it isn't because it isn't in progress. It's just that I am trying very hard not to waste energy beating myself up for not getting things done--and I am always beating myself up for not getting things done, even when I try to keep the external expectations minimal. In fact, beating myself up for not getting things done is what spawned the creation of this entire graphic!

It's been a rough few years, fam. But I promise I'm doing my best.