Revisiting Heracles and The Great Tradition of Pantsless Heroes

I wasn't originally intending to promote more naked sculpture this week. I was actually planning an interesting insight into the similarities between Jesus and Heracles instead. But (or should I say butt?) I found a picture on wiki commons of a sculpture which really, really deserved its own post. And not just because of the pantslessness. This image deserves its own post because it is just flat-out incredibly alive for a work of stone and photography. Because when I look at it, there's a catch in my throat at the beauty-- the way the light plays over the marble, the subtlety of carving which creates muscle and soft skin from rock. Heracles gets a lot of sculptures, but this image is flesh and soul, life and breath. 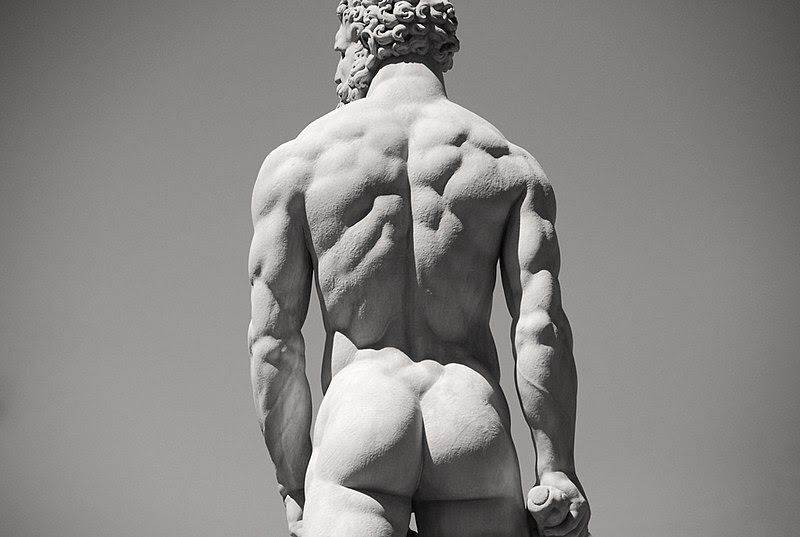 Basically, friends and followers, this is my homage to both the sculptor (Baccio Bandinelli) and the photographer who took this picture (Cyberuly), because I am in awe of what they have created together. You can find an image of the full sculpture here,  but it isn't NEARLY as impressive as this image, and frankly I find it a little bit disappointing. There is also a wiki page about the sculpture itself.

Keeping to the theme of bare backsides, the following is similarly beautiful image (from this site) of one of the Heracles/Hercules sculptures from the last blogpost which I absolutely love because he looks SO relaxed, and so supremely confident, while at the same time appearing as though he could spring into action at any moment. And behind his back? Those are the golden apples he obtained as one of his labors.

It's a Roman copy made ~3rd century AD of a Greek original which dates back to ~4th century BC, or so Wikipedia tells me (because again, I am no art historian). But obviously, when I say the tradition of Pantsless Heroes reaches back, this is one of the proofs in the pudding, so to speak.

But I mean, just look at it. The proportions, the balance, the natural feeling of the pose. The Greeks and Romans were masters of this art. And this Herc is just as beautiful from the front as he is from the back. Somehow, they have managed to carve grace into marble, and I am and always will be in complete awe of their skill.

It isn't just about the naked men (though I grant you, they are mighty fine). It's about breathing life into stone, and the fact that it is still standing, giving us this glimpse of how the Greeks and the Romans pictured their heroes. Even how they imagined the divine.

It's a little window into the past, and I can't stop myself from looking through it.