Thor in Drag (er. and some Loki misc.)

While doing some research on Loki's parentage (which is pretty fascinating by the way, because he is known as Laufey's son-- that is the son of his mother-- and not as the son of Fárbauti the giant who was his father, which is very odd for ye olden days. I mean, today people in Iceland use matronymics because women are liberated and claiming descent from your mother is just a personal choice, but back in the day that was not the case at all. According to John Lindow in the book NORSE MYTHOLOGY: A GUIDE TO GODS, HEROES, RITUALS, AND BELIEFS [oxford university press US, 2001], "One had a given name and a patronymic, except in those rare cases when the father was unknown or unsavory, in which case one had a matronymic." He goes on to suggest that because Loki's father was a giant, that might have fallen under the category of unsavory and so he went by his mother's name instead. But who the heck WAS his mother? There's not really a lot of evidence for her in the texts, but Lindow puts forth the theory that she was a goddess, and that's part of why Loki was able to be included among the Aesir!) I came across this awesome piece of artwork depicting Thor as he was dressed for his false-wedding. 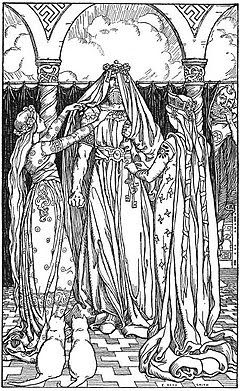 I've mentioned the story before, but I'm not sure I've ever really told it myself. The most important points are these: Thor woke up one morning to find Mjolnir conspicuously absent and sent Loki in search of it. How the heck someone else snatched Mjolnir out from under Thor's nose is not explained, BUT, Loki encounters a giant named Thrym (for whom the poem is named Þrymskviða), who claims to have stolen it and hidden it where Thor will never get it back UNLESS the gods give him Freyja as his wife. As you can imagine, Freyja is not interested in this arrangement, and Freyja being who she is, simply refuses, so the gods decide (Heimdal comes up with the plan, and Loki talks a VERY reluctant Thor into it) to dress Thor up as Freyja and send him to Thrym to be wed.

Thrym is clearly not the brightest crayon in the box, since he's taken in by this ruse. It's kind of a "Grandma, my what big ears you have!" moment, with Loki whispering "the better to hear you with, my dear!" in Thrym's ear, disguised as Freyja/Thor's maid. And seriously, Thor really does not do a whole lot to keep his disguise, as you can see by this singular quotation:


25. Then loud spake Thrym, | the giants' leader:
"Who ever saw bride | more keenly bite?
I ne'er saw bride | with a broader bite,
Nor a maiden who drank | more mead than this!"


26. Hard by there sat | the serving-maid wise,
So well she answered | the giant's words:
"From food has Freyja | eight nights fasted,
So hot was her longing | for Jotunheim."

For real guys. Thrym bought this. After watching his bride-to-be eat an entire ox. In fact, he bought it so hard, he brought out Mjolnir and set it in Thor/Freyja's lap.

At which point, Thor went about slaughtering the giants, of course. All while still dressed as a bride. And what a pretty bride he makes!
Posted by Amalia Dillin at 00:01