The Character of Paris [Ovid]

I haven't talked about him a lot, because I haven't written about him. His story was always supposed to be Helen's sequel, maybe even an independent companion novel. But Paris doesn't hold the same fascination for me that Theseus does, or even Menelaus. His story has been done so many times, and no matter how hard people try -- and it is clear that we have tried VERY hard -- there isn't really any way to make Paris into a real hero. The gods don't allow him to be one. They don't even let him become a proper anti-hero! I've never understood what Helen saw in him (that is not to say he is not brave and valiant in her defense, as far as he's allowed by Aphrodite), and to me, that's maybe the more fascinating and telling element. How bad was Helen's life with Menelaus that she thought running off with Paris and starting a war would be an improvement?

But I do love Ovid's writing of Paris in the Heroides. I know I've talked about it a little bit before, but those exercises of rhetoric are by far the most fascinating illustration of Paris' character that I've come across. He is bold and confident and unafraid. He's determined and conniving. There is absolutely nothing fickle about his desire for Helen. He wants her, and he's willing to employ every dirty trick in the book to get her. However idiotic he might be later, in Ovid's letters, Paris charms me. I can believe, reading his letter to Helen, that she was fighting against someone with an overpowering charisma-- and that she had no real defense against such a man's seduction, especially if her relationship to Menelaus was less than great.


My passion for you I have brought; I did not find it here. It is that which was the cause of so long a voyage, for neither gloomy storm has driven me hither, nor a wandering course; [...] It is you I come for – you, whom golden Venus has promised for my bed; you were my heart’s desire before you were known to me. I beheld your features with my soul ere I saw them with my eyes; rumour, that told me of you, was the first to deal my wound.

and then he boasts!


And as I long for you, so women have longed for me; alone, you can possess the object of many women’s prayers! And not only have the daughters of princes and chieftains sought me, but even the nymphs have felt for me the cares of love. 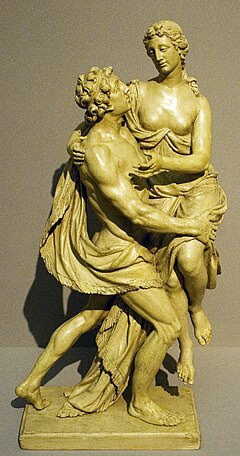 Paris, Paris, Paris. You sure are full of yourself. And he's so unapologetic about it! I think that's what I like the most -- how he honestly believes that he is doing nothing wrong in seducing another man's wife. He has absolutely no shame, and that's even more well illustrated when he talks about her abduction by Theseus (emphasis mine).


And so Theseus rightly felt love’s flame, for he was acquaint with all your charms, and you seemed fit spoil for the great hero to steal away, [...] His stealing you away, I commend; my marvel is that he ever gave you back. So fine a spoil should have been kept with constancy. Sooner would this head have left my bloody neck that you have been dragged from marriage-chamber of mine. One like you, would ever these hands of mine be willing to let go? One like you, would I, alive, allow to leave my embrace? If you must needs have been rendered up, I should first at least have taken some pledge from you; my love for you would not have been wholly for naught. Either your virgin flower I should have plucked, or taken what could be stolen without hurt to your virgin state.

"His stealing you away, I commend; my marvel is that he ever gave you back." Paris' admissions are kind of alarming, if you ask me. But he is SO confident that she will love him, is meant to love him and can't resist him, he holds nothing back. Not even a confession that if he had been Theseus, he would have raped her, if need be. (And I'm not going to touch the fact that he talks about her like she's furniture-- that wouldn't have been odd to Helen, just as it was totally natural for Ovid.)

Even his bribes are presented in such a matter of fact way that it's obvious he doesn't think he's bribing her so much as stating the facts. The FACTS are that Troy is far wealthier, and she will be showered in riches and kept in splendor. The FACTS are that he can offer her a better life than she'll ever have in Sparta, which is nothing in comparison to his homeland. The FACTS are that Menelaus doesn't deserve her.


I regret my being a guest, when before my eyes that rustic lays his arms about your neck. I burst with anger and envy – for why should I not tell everything? – when he lays his mantle over your limbs to keep you warm. But when you openly give him tender kisses, I take up my goblet and hold it before my eyes; when he holds you closely pressed, I let my gaze fall, and the dull food grows big within my unwilling mouth.

His recklessness, his boldness in addressing her so honestly and so brutally, is what's so appealing. He is SO in love with her that he can't help himself, that he has no fear at all. Here is the bad boy, the anti-hero we're denied. He's completely arrogant, and committed to making the most of the opportunity he's been given (with Menelaus away in Crete) by any means necessary. Sure, he'd prefer her willing, but from the tenor of this letter, it's clear that he won't let her willingness really get in his way if she gives him even the smallest of openings.

Paris is a villain. A stalker, obsessed with his prey. And he will not stop, because he sees encouragement in every polite smile she gives him. He will not stop because the gods have given Helen to him, and in that certainty, there is nothing she can say that will dissuade him from what he perceives as the truth, the facts. She will love him, eventually. Aphrodite herself promised it.

Reading Ovid, I can believe that Helen never had a chance.
Posted by Amalia Dillin at 00:01

Email ThisBlogThis!Share to TwitterShare to FacebookShare to Pinterest
Labels: Amalia Carosella, Aphrodite, Classics, Helen, Paris, Theseus Should Really Have His Own Tag, Troy