Heracles Is Not My Favorite

I don't know what it is about him-- maybe because he's so well-known, but I just don't feel drawn to Heracles, generally. If I were to write a sequel to Helen of Sparta though, I'd end up having to research him. In my Pirithous book, I toyed with the idea of bringing demigods into the modern world. A missing father is really a god called back to Olympus, etc. I didn't actually go with that, because it was a little bit too Percy Jackson, and in the context of the romance the story was supposed to be, it didn't really serve a purpose, but it led me to wikipedia for a refresh of some Heracles basics. (Because obviously Heracles is a god, now, serving as a guardian of Olympus, and nobody ever talks about demigod children of Heracles!)

Specifically, I wanted to know what he looked like -- not the symbols which identified him, like the lion skin or the club or the apples in his hands, but hair and eye color, proportions, his physical self. Of course wikipedia was pretty much useless in this regard, BUT, I did find a couple of pictures of some marble statuary. Roman copies of Greek originals. Which uh, also do not tell me anything about his hair or eye color at this time, but I thought I'd share them all the same. 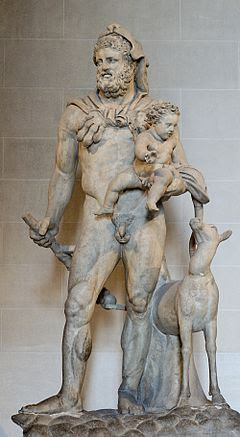 What I found perhaps even more interesting on the wikipedia page was the list of his consorts and children. Don't get me wrong, I was well aware of the fact that Heracles got around. I mean, who doesn't know that Heracles had multiple wives? I just hadn't realized quite how many other women he was involved with, or how many children he had. And seeing it as a list -- well. Let's just say it sunk in a little bit deeper, and I'm starting to wonder how Heracles had TIME to fight monsters with all the other um, activities, he was engaged in (that Thirteenth Labor must have been real rough on him--I think it deserves an Affairs of the Gods recounting at some future date). But man, it would suck to have been a child of Heracles. I mean, sure, you got the prestige of being the son of (arguably) one of the most famous men in all of history, and the touch of demigod blood probably made your life easier, but when you were competing with that many half-siblings for his time? In most cases, behind his wife's back? Clearly Heracles took after his father, Zeus, and I'm not sure I blame his wife for the poison shirt anymore.

All that said, that statue of Heracles holding an infant in one arm and that club in the other, with that slight smile on his face? I feel like it gives us a great glimpse into the Greek interpretation of Heracles' character. He was a protector, a hero, a great man, but for all that, he was not untouchable or unreachable to the people around him. He was also the kind of man who didn't shy from bouncing a baby on his knee when he wasn't busy saving the world from monsters. And maybe, just maybe, the babies were the reason he went to all that trouble to begin with.

I'm not going to lie, that statue makes me like Heracles a little bit more than I did when I started.
Posted by Amalia Dillin at 00:01