Why is my Lounge filled with Bloggers? OR Bloggy Snatchers Blogfest!

Please go here to see the list of other participants in Ms. SonshineMusic's Excellent Festival of Blogs. And do be sure that you read Mia's post here before this one, because it is to this--this--IMPOSITION--that I am responding! :P

I knew Mia was coming today, but I had some errands to run before she arrived, so I had been out for most of the morning. Mostly these errands involved buying hot dogs to have on hand for the zombies, just in case, and let me tell you that a certain Thunder God was not happy about the news that we were having undead guests.

"Zombies are trouble," he grumbled, holding the door for me when we arrived back at the house. "And you'll have a mess. It isn't as if you can train them. Glitter," he warned. "Everywhere."

"It's only for a few days." I ignored his glower. Thunder gods are incredibly skilled at glowering, and then the whole sky glowers down on people too. I smiled brightly to counteract the darkening clouds, and he exhaled his frustration as we headed into the kitchen. He set the groceries down on the counter, still grumbling. And when I say grumble, I mean rumble. But as long as it was only a quiet roll of thunder, I figured we'd be okay.

Before I could even get the hot dogs out of the bag, the lounge door exploded inward. A woman with feathers stuck to her clothing and glitter on her skin blasted through the kitchen, shouting, and ran straight into Thor's immense person, followed by three zombies. Thor caught the human, but he let the zombies bounce, his eyes flaming white as they toppled to the floor in a pile.

He gave me a LOOK, his lips pressed together into a grim, I-told-you-so line that I was much, much too familiar with.

"Oh, Amalia! You're home!" Tessa smiled, brushing herself off and glancing side long at the thunder god who had just crossed his arms over his chest in a very imposing manner. The zombies scrambled under his glare, lurching back the way they had come leaving a trail of feathers and glitter. "That's wonderful! Now we can really get started!"

"Get... started?" I was wondering if that was really a question I wanted to ask even while I followed the zombie-path to the door. They had left it open of course, when they ran back out.

I blinked a few times at the sight that greeted me in the lounge. How had I not heard the television when we walked in? Nick must have had the volume at 62 to hear it over the others, and Simon was laughing with him loudly, waving his glass. I hoped that he had brought his own Vodka, because I was fairly certain the quality of mine was not up to his usual--shall we say-- par?

"Well," Tessa was saying behind me, "We heard that Mia was coming, and so we figured you wouldn't mind if we came too, especially since she was bringing the zombies already. You can always use a few more hands to keep them from getting into things!"

"Yes," I said faintly, watching the zombies in question throw glitter at one another, getting it absolutely everywhere all over my favorite brown paisley armchair. 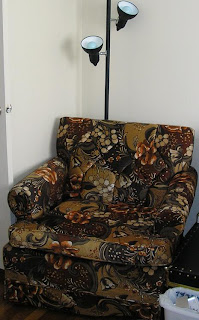 Behind me, I heard a very distinct snort from Thor at my internal monologue. I cleared my throat.

"#Amalia!" Mia grinned, hopping up from her seat on the couch and skipping toward me.

Everyone else looked up, seeing me for the first time. A chorus of hellos came from Rebecca, Naomi, and Tahereh. Nick gave one of those I'm-too-cool-to-look-up-from-the-game half-waves of the wrist, and Simon raised his glass with a "Cheers!"

And then the training of my childhood kicked in. Apparently, seeing so many people in my lounge, I had no other choice. There was only one thing that could be done in this scenario of home-invasion!

"Anybody need something to drink? a glass of water? Something to eat? I brought..." I glanced at the zombies and lowered my voice to a whisper so only Mia and Tessa could hear. "I bought some hot dogs for the zombies."

Thor sighed, evidently giving up on the idea that I was going to let him evict anyone. A rumble of thunder sounded outside, but it didn't shake the walls, so I figured it would all be fine. There would be plenty of time to kick everyone out later, after all, AFTER they'd been fed.

SO THERE, BLOGGY INVADERS! SO. THERE.
Posted by Amalia Dillin at 11:53