FATE FORGOTTEN is the second book in the Fate of the Gods trilogy, coming November 5th, 2013 (just in time for Thor 2!) and I'm thrilled to be able to share the fantastic cover art World Weaver Press put together for the novel!

But before we get to the art, let me tell you a little bit more about FATE FORGOTTEN:

FATE FORGOTTEN will pick up where FORGED BY FATE left off -- and I can't wait to share it with you all! In the meantime, don't forget to add it on Goodreads, and as always, you can learn more about the series and the individual titles over at World Weaver Press, or just click on the Fate of the Gods tab above! 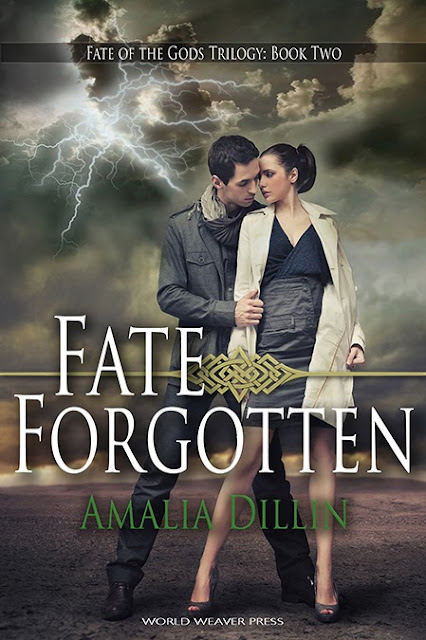 There are so many things I love about this cover. The way Eve is turning her face back toward Adam as she leans away, as if she isn't quite sure what she wants. The way Adam is invading her personal space, his hand clutching at her jacket. The way the lightning seems to be pointing RIGHT at Adam, like Thor wants to stab him between the shoulder blades for his impertinence. The storm in general. The barrenness of the landscape, as a reminder of what Adam and Eve together could do to the world, if Eve gives in to that conflicted-maybe-I-do-want-to-stay look on her face. SO MANY FEELS, YOU GUYS.

Eeeeeeeeeeeeeee!!!!!!!!!!!!!!!!!! with me in the comments! And/or leave your predictions about what's coming for Adam, Eve, and Thor in Fate Forgotten! I will, of course, neither confirm nor deny!
Posted by Amalia Dillin at 00:00