Name that Butt: Round Three REVEAL!

This is HALF TIME, and the end of Name that Butt stage ONE, because TEMPTING FATE comes out on Tuesday, August 13th and I should probably do some, you know, promoting or something. Plus I have some other giveaways up my sleeve to celebrate.

THE NEXT NAME THAT BUTT will be posted... oh, let's say August 27th! Stage TWO may or may not include some added skill tests related to artists and titles of the artwork for bonus points and will have a slightly different format (New butt goes up on Tuesday, Reveal on Friday) so this is still ANYONE'S game! (And I promise by then I'll have a concrete idea of what kind of prize you guys are competing for beyond Butt Postcards.) 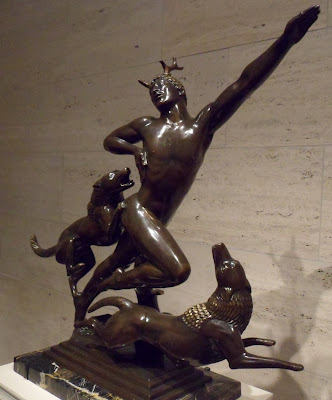 This is a less familiar myth, so I wanted to give you a little bit of a summary -- though those of you who guessed correctly probably already know!

The details vary, but what never changes is that Actaeon had the audacity to insult Artemis, either by spying on her while she bathed in a pond in the wood, or by claiming he was a better hunter than she was, or possibly, by attempting to become her consort (virgin goddesses really don't like that). As a result, Artemis turned him into a stag, and he was ripped apart by his own hunting dogs, who later mourned his loss, but didn't realize what they were doing at the time. Poor Actaeon, the famous hunter, trained and schooled by the centaur Chiron (the very same centaur who trained Achilles and so on), became the hunted.

And that, my friends, is why this butt has antlers.

And now, the Stage One Half-Time winner is a TIE between Melissa and Faithlessone! I'm going to have to institute a tie-breaker quick challenge-- the first one to link me to a verifiable Theseus-Backside in the comments wins the stage one prize of fabulous BUTT POSTCARDS!